What goes on in a shopper’s mind when they’re making a purchasing decision? A previous study on shopping psychology analyzed the different ways consumers respond to discounts and classified them into two different categories: value-conscious and deal-prone. Value-conscious shoppers take advantage of discounts solely for the cost savings. Deal-prone shoppers enjoy saving money plus the feeling of satisfaction that comes with getting a great deal. Researchers also aimed to show sellers how to present promotions in ways that could increase profits and satisfy customers.

This past study, however, didn’t examine the identities of value-conscious and deal-prone shoppers, nor how these two groups felt about their purchasing decisions. It also ignored the effects these different psychologies have on brand loyalty, especially when controversy causes friction between a brand and a consumer. The rise of socially conscious consumers is now at a point where shoppers expect brands to take a stand on social issues. Our recent study of more than 1,000 discount shoppers helps brands to determine the best ways to market to these consumers when faced with the loss of their brand loyalty.

Value-Conscious or Deal-Prone? How Shoppers Identify Themselves

Our study into shopper psychology begins with survey participants identifying their shopping attitudes. What are they thinking when they’re trying to decide whether or not to make a purchase? We also accounted for each respondent’s age and gender and looked at how their psychology affected their recent purchasing habits. 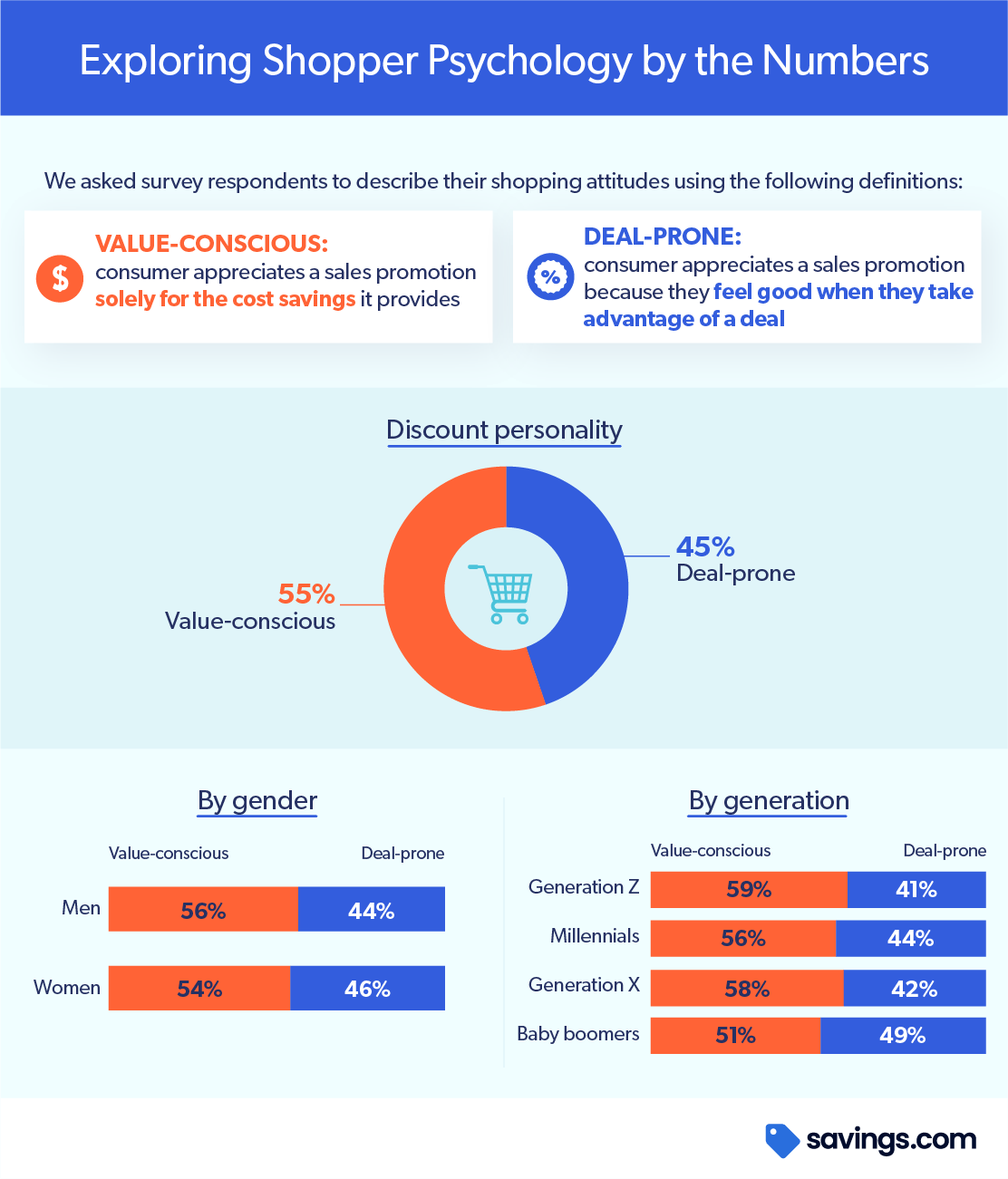 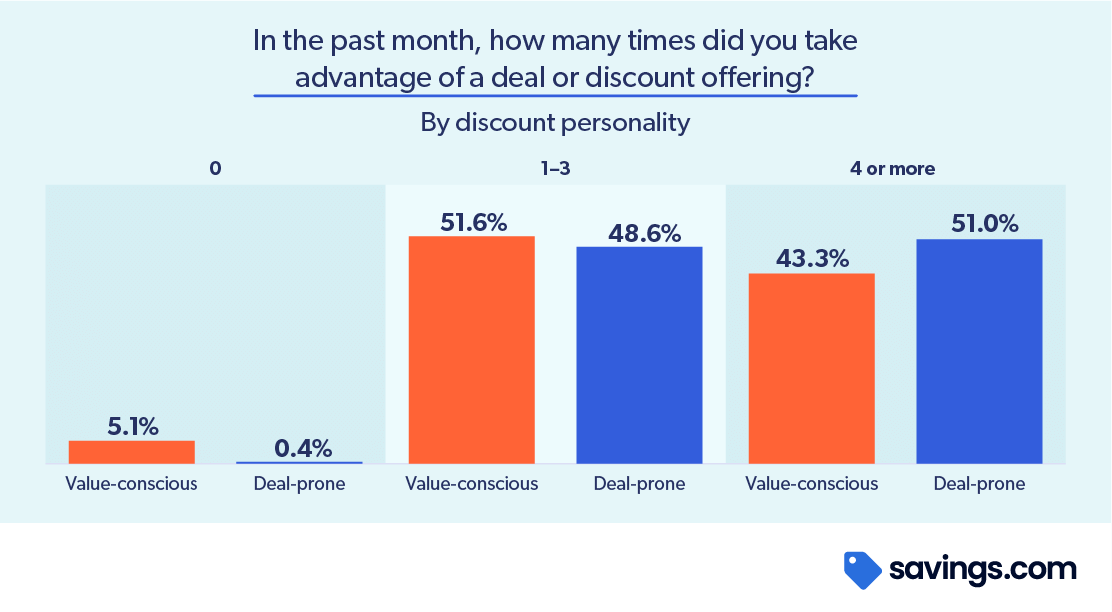 More than half of our respondents (55%) identified as value-conscious shoppers – those whose purchases are usually only driven by the money they can save. Less than half (45%) identified as deal-prone shoppers who like to save money because it’s smart – and because it feels good. Deal-prone shoppers made a discounted purchase around once per week, which was more frequently than value-conscious shoppers.

How Saving Money Leads to Regret

Buyer’s remorse is the feeling of guilt or regret a shopper has after making a purchase, especially if it’s nonrefundable. Maybe they spent too much, the item didn’t meet their expectations, or it wasn’t something they truly needed. Does being value-conscious or deal-prone affect the feelings of regret one can experience after shopping? Take a look at people’s responses below. 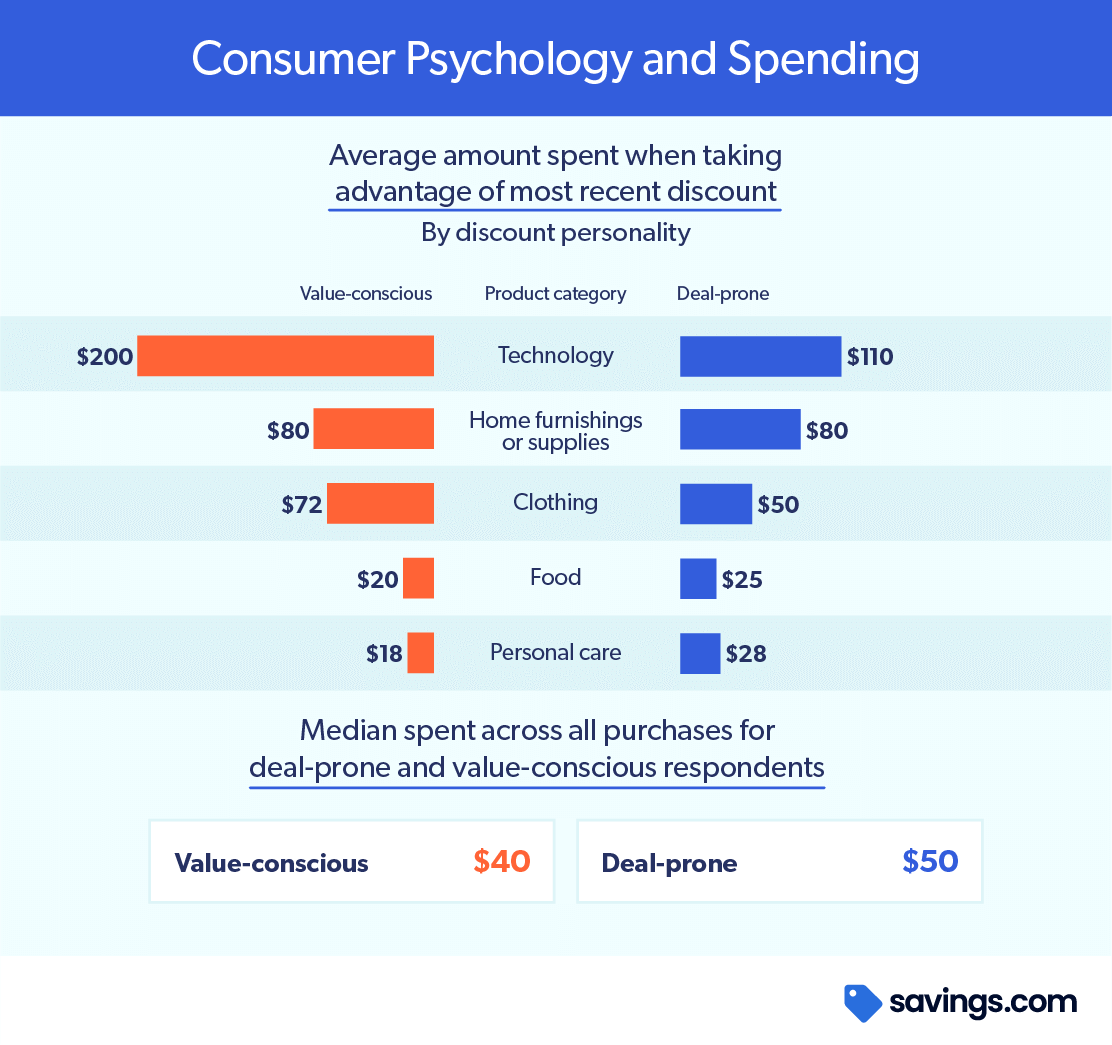 Taking advantage of a deal feels great but often has unfortunate consequences for deal-prone shoppers. Of those regretting all of their recent purchases, 85% identified as deal-prone, while only 15% were value-conscious. Deal-prone shoppers may also be more susceptible to impulse buying as a previous study concluded that both positive and negative emotions have an impact on impulse buying habits.

The deal-prone may buy more discounted products than intended because they don’t want to miss a money-saving opportunity, or they’re seeking a mood boost. Marketing techniques such as sales and coupons encourage impulse buying and have been linked to increased levels of oxytocin in the brain, which increases feelings of happiness and decreases stress. Impulsive shopping has also been linked to shopping addiction. Impulsive buyers feel a temporary high when shopping that leads to feelings of regret after making a purchase. These negative feelings of dissatisfaction can compel shoppers to buy impulsively again to feel better. 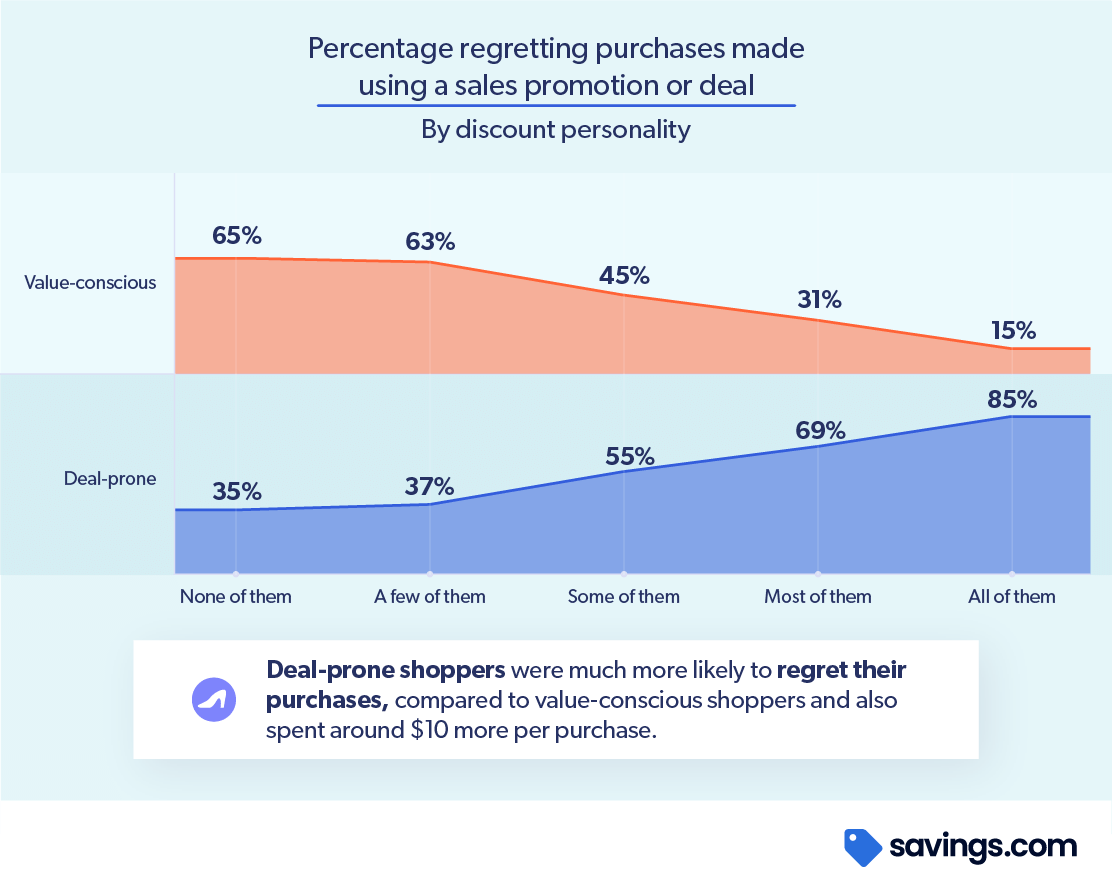 The data suggests when people buy what they don’t need, simply for the satisfaction of it, most end up feeling buyer’s remorse. Even though these shoppers are buying discounted items, they could be overspending or feel like they’ve wasted their money. Most deal-prone consumers said they regret most or all of their recent purchases, while the majority of value-conscious buyers regretted none to just a few of their recent buys.

Controversies are often sparked when a company, or someone associated with the business, takes a public stance on a current event or issue. Some controversies are a matter of opinion, while others can be downright wrong or extremely offensive. Are consumer thought processes affected when a company takes a controversial stance on a hot-button topic? And, if so, does the controversy then affect their spending decisions? Here’s what our survey takers had to report. 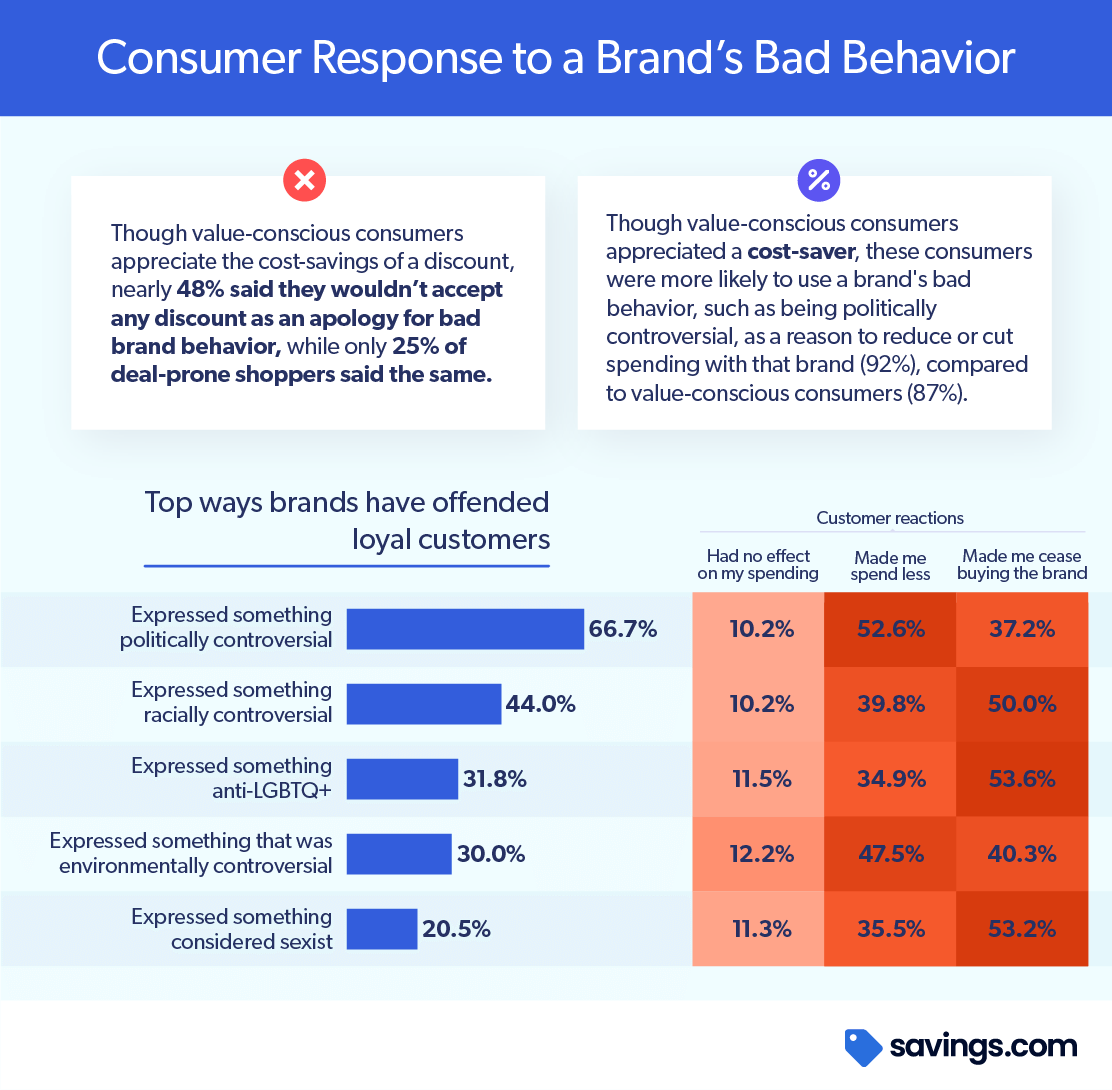 Current worries about the environment, racial issues, and divisive politics are all topics that may lead to a heated controversy. Each issue’s effect on consumer psychology and their spending depends on how the company responds to their bad behavior. Once offended, some customers chose to spend less on a brand or completely stop buying from them. Brands that expressed anti-LGBTQ+, racially-charged, or sexist remarks were most likely to be boycotted by outraged shoppers. Unfortunately, for brands who commit these offenses, it isn’t easy winning back customers:

Over half of our respondents agreed that the best thing for a company to do to regain their loyalty was to issue a public apology. Many also wanted companies to take greater measures by making a philanthropic commitment or donation to help the group that was negatively targeted by the brand. 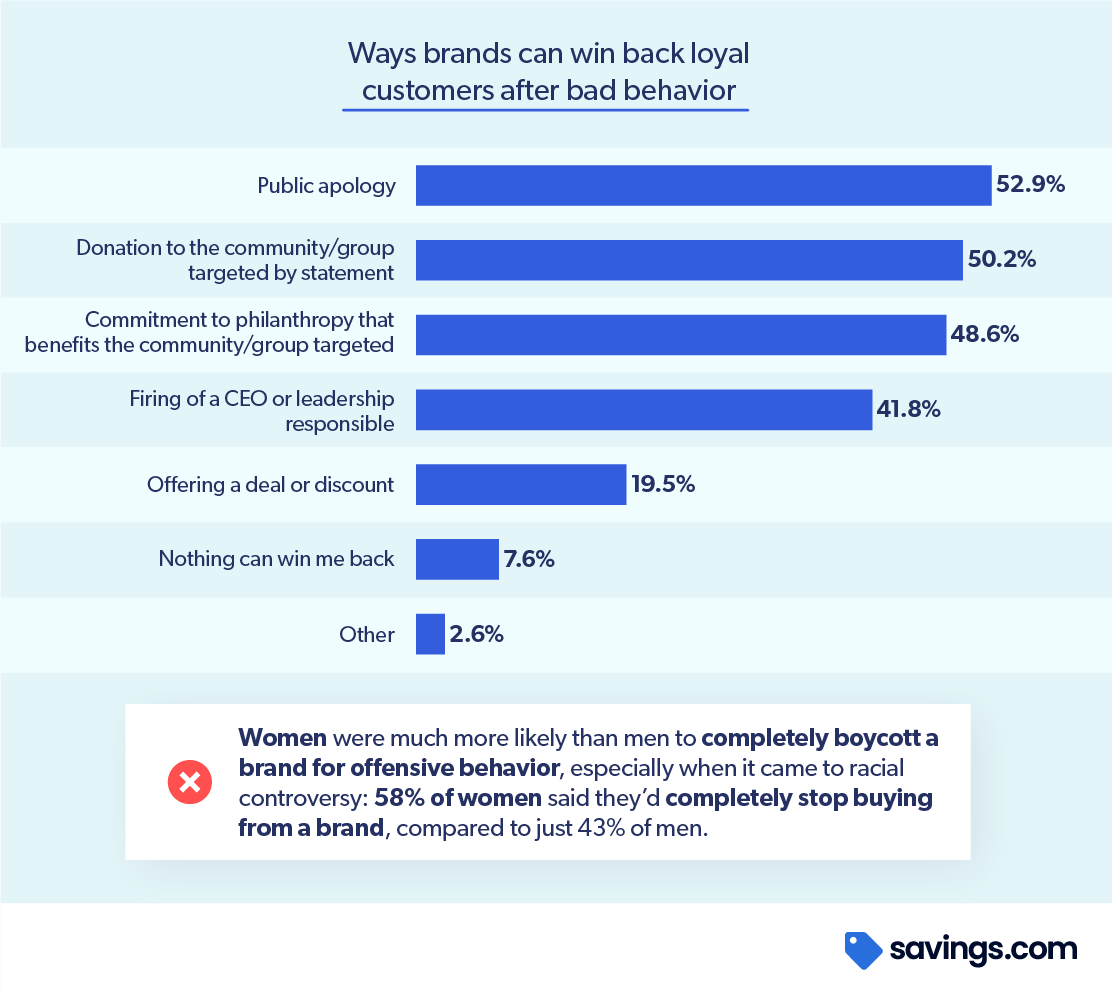 Offering a deal or discount is another way for a brand to regain customer loyalty. Almost 20% of shoppers said that they would buy from a brand that offered a promotion after a controversy. Earning and retaining brand loyalty is a major key to business success. It not only ensures repeat customers but also brings in new shoppers – almost 60% of consumers encourage others to buy the brands they love.

Here were some of our findings when we looked at apology strategies by discount personality:

There is much that goes on in a consumer’s mind when making a purchasing decision. More than half of those we surveyed identified as value-conscious shoppers who buy products or services based on how much they can save. These consumers show more restraint in spending and tend to be highly satisfied with their purchases. They also don’t let the mental thrill of discount shopping sway their purchasing decisions when a company exhibits bad behavior. Once a brand loses this type of consumer, it will be harder to win them back.

On the other hand, the deal-prone shopper loves the psychological excitement of discount shopping. They end up paying for it in more ways than one. Buyer’s remorse and dissatisfaction are much higher among this group, showing that shopping highs are usually followed by lows. The deal-prone are also more likely to stay loyal to a brand after an apology for bad behavior, with 75% saying they would accept a discount to make things right. It just goes to show that this type of consumer psychology is so driven by feelings of satisfaction that they don’t always make the best purchasing decisions.

We surveyed 1,005 people about their shopping preferences. Fifty-one percent of respondents were men, and 49% were women. Respondents ranged in age from 18 to 79 with an average age of 40.

We also surveyed 622 people that stated a favorite company of theirs took on controversial stances that made them lose their loyalty to the brand. Fifty-two percent of these respondents were men, and 48% were women. Respondents ranged in age from 18 to 88 with an average age of 38.

For short, open-ended questions, outliers were removed. To help ensure that all respondents took our survey seriously, they were required to identify and correctly answer an attention-check question.