Steve Jobs gave the world the Macintosh computer, the iPhone, and of course, the Apple keynote event. His legacy lives on through these dramatic product release events, which continue to grab headlines year after year. October’s “Unleashed" event was no exception.

At the tech giant’s most recent hypefest, Apple introduced its upgraded AirPods, colorful HomePods, and a next-generation MacBook Pro. But does the buzz around Apple’s product launches translate into immediate consumer action?

Although fans anticipated the iPhone 13 even before its release, just 10 percent of iPhone users actually planned to upgrade once the new device hit the market. Will the same thing happen in the case of 2021 MacBook Pro, updated HomePod mini, and third generation AirPods? To find out, we asked more than 750 Mac users to share their initial impressions and purchasing plans for the brand-new gaggle of gadgets.

Judging MacBook by its Cover: New Laptop Appealing, But Too Expensive for Impulsive Upgrade

Around eight percent of respondents watched the Apple event first-hand, and 45 percent were aware of the forthcoming MacBook Pro – a testament to the power of advertising and social media.

Nearly one-third of current Mac users were open to purchasing the new laptop in the next six months, but only five percent are certain to seal the deal. 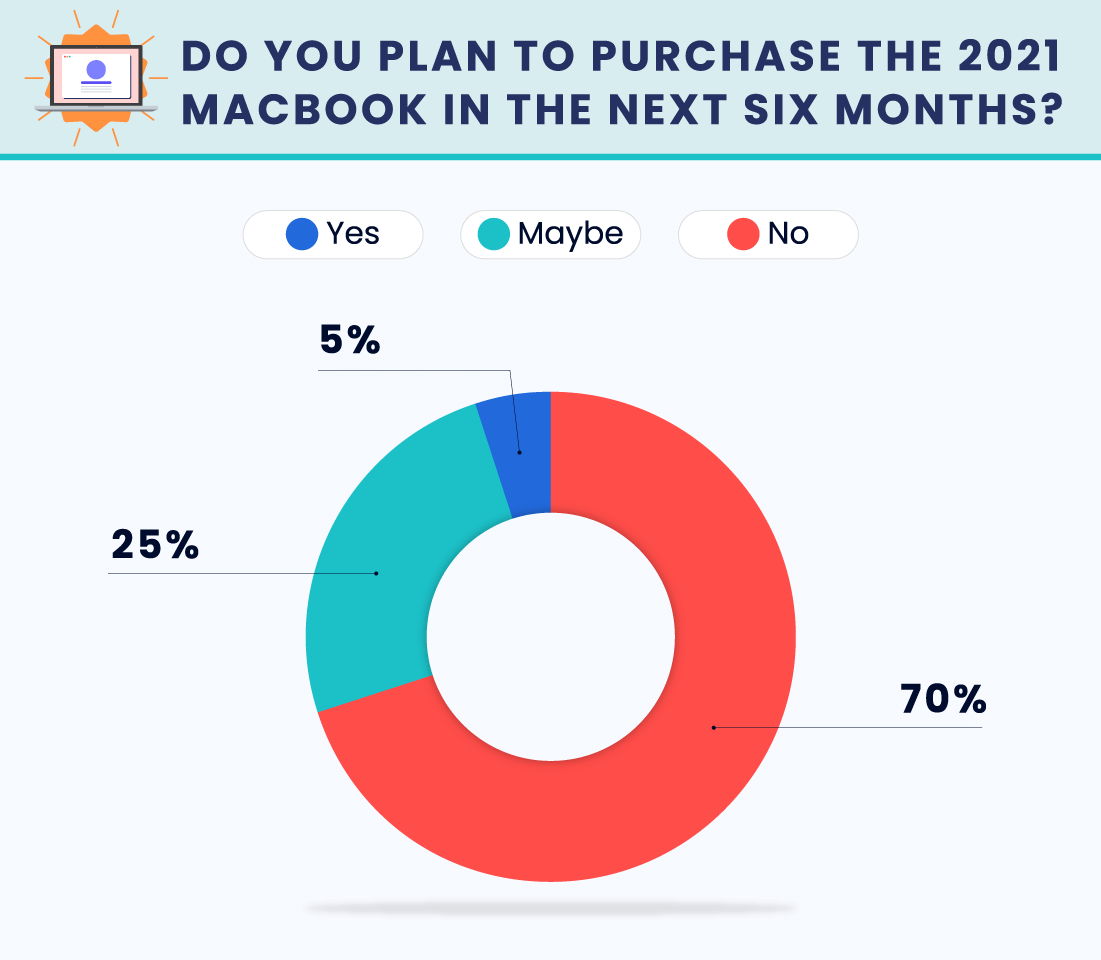 Among the group in play for a new MacBook Pro, faster M1 processing was the main selling point, followed by improved batteries and better charging as the most appealing features.

Most Mac users sitting out this upgrade are either happy with their current machines or put off by the prohibitive price point. At $1999 for the 14-inch MacBook Pro and $2499 for the 16-inch model, neither is likely to make the list of 2021’s best laptop deals or even go on sale.

In line with those influences, we saw that the willingness to upgrade rose directly with the age of a user’s current machine. People whose computers were at least six years old were much more likely to purchase a new MacBook than those whose machines were still relatively new.

User age also contributed to the purchasing decision; respondents aged 35 or older (presumably with more disposable income) were more likely to shell out for the new model than those aged 18-34.

Overall, the MacBook Pro’s redesign and top-line features proved tempting, but lukewarm awareness, satisfaction with current models, and elevated prices leave only a fraction of Mac users ready to pull the trigger on an upgrade. AirPod Users Are Ready to Upgrade

The MacBook Pro was the belle of the ball but not the only new product on display. The next generation of Apple's AirPod wireless earbuds and a slew of new colors for the HomePod mini were also announced.

Demonstrating commitment to the collective Apple ecosystem, we found that 63 percent of Mac users also use AirPods.

In a testament to customer satisfaction, current AirPod ownership also proved the prime indicator for interest in a new set: 82 percent of those planning to buy the new generation already own an older one.

Still, despite improved battery life, water-resistance, and a revamped look, only 8 percent of all respondents are committed to buying new AirPods in the next 6 months, with another 19 percent unsure.

Apple recently discontinued the original HomePod to focus on the HomePod mini, yet this launch event revealed only a few new colors (dark blue, orange, and yellow) with no significant hardware upgrades.

As a smart speaker whose market share lags greatly behind Amazon’s Echo, the HomePod mini has a devoted following (45 percent of current owners are interested in the new model) but won't gain much ground overall this year. Only 2 percent of all Mac users are planning a purchase.

Just five weeks after revealing the new iPhones and iPads at its “California Streaming" event, Apple sought to prolong its buzz by “unleashing" its redesigned MacBook Pro. Whether the company succeeded in sowing the seeds of continued success remains to be seen.

On the positive side, several MacBook Pro features appealed to Mac users, who showed an interest in upgrading and demonstrated their usual fierce brand loyalty (only 2 percent of respondents exhibited a desire to switch away from Macs).

Less encouraging was the low percentage of consumers committed to buying the new model and the number of Mac users suffering sticker shock over the MacBook Pro's higher price.

Our research suggests there won't be lines camping out for the new MacBook Pro's release, but that the impressively overhauled laptop will prove popular in the long run. As ad campaigns heighten awareness, current machines age out, and Apple Nation saves enough money (or expresses sufficient holiday wishes) to bring home the new generation, it won't be a surprise if many "maybes" in our poll eventually turn into purchases.

Meanwhile, the HomePod mini will need to change more than its colors to make a splash on the scene, and AirPods will remain a popular accessory – especially among those who already own a pair.

If you’re ready to upgrade, all of these products are available now at Apple or BestBuy. The HomePod mini and third- generation AirPods are also available now at major retailers like Target and Walmart.

Apple unveiled its new MacBook Pro, AirPods, and HomePod mini during an online event on October 18, 2021. In the wake of the announcement (October 21-22, 2021), we conducted a poll of 756 current Mac users to assess their awareness of the new products, as well as their impressions, and plans to purchase the devices.