Though many people still incorrectly believe that Valentine’s Day was invented by greeting card companies, the holiday remains an incredibly popular one for Americans who are in romantic relationships, whether married or dating.

Analysts expect Valentine’s Day spending to near $24 billion in 2022, which would make it the second-highest year on record. If you’re one of the millions of Americans who still need to buy a gift, this study may be just the antidote on what to buy and how much to spend. We asked more than 1,000 U.S. adults in romantic relationships about their plans, expectations and frank opinions about receiving gifts.

We asked people to say how much they’d like to receive some of the most common Valentine’s Day gifts. Turns out, men were more excited than women about all of the gifts on our list except one.

The top three favorite gifts men loved to receive were flowers, chocolates or sweets, and massage or spa treatments. For women, chocolates are first, followed by sexy games and toys, and jewelry.

While the most beloved gifts varied for women and men, they found common ground on the gifts they hate most. For both men and women, balloons are the only Valentine’s Day gift to get a higher hate than love rating. Twenty-two percent of women and 18 percent of men say they hate getting balloons for Valentine’s Day, and taking everyone into account, about 51 percent said they hate or dislike balloon gifts.

Just over one in four people we talked to said they wouldn’t be giving or receiving a Valentine’s Day gift this year, which means that the clear majority of people in relationships will take part in the holiday. However, while most people are planning to take part, there are some notable differences when it comes to gender, age, and relationship status.

Women were more likely than men to say they wouldn’t be getting or giving a Valentine’s Day gift. But among those who do expect to take part in the holiday, there’s a much narrower gulf between giving and receiving for women than for men.

More than three-quarters of men said they’d be shopping for the holiday, while only 42 percent of them expect to get anything – a 35-point difference; for women, this difference is just six percentage points.

Older adults are less likely to say they plan to give or expect to receive a gift for Valentine’s Day – about one in three say they won’t be taking part in the holiday. This is in contrast with young adults (those between 18 and 29 years old). Nearly 80 percent of this group plan to give gifts, and 70 percent expect to receive.

The average Valentine’s Day gift-giver expects to spend about $82, though as with participation, some factors influence how much people expect to shell out on gifts.

Men plan to spend more than women, with the average female gift-giver budgeting about $64 compared to $97 for the average man. And women are expecting to get more expensive stuff than men – nearly $25 more on average.

How much are people planning to give and receive?

Relationship length is also an influential factor when it comes to how much people plan to spend picking out the perfect gift for their partner. Those in new relationships are spending the least, while those who have been with their significant other for 5-9 years will spend the most – $103 on average.

Notably, people we talked to who identify as LGBTQ have similar participation rates in the holiday, but they expect to both give and get less expensive gifts than their straight counterparts, in some cases by considerable margins.

People who are LGBTQ plan to spend around $59 on their partners, while straight people plan to spend $86. Additionally, LGBTQ people expect to receive gifts valued around $52 on average, compared to $67 for straight people. One potential reason for this difference could be the lack of representation in Valentine’s Day marketing. Until fairly recently, Valentine’s Day merchandise and advertising was far more likely to depict straight couples than LGBTQ pairs. Even something as simple as a representative greeting card can be tough to find for queer gift-givers, which could understandably keep them from spending money on Valentine’s Day gifts.

So, what should you buy for your special someone? For some people, that’s a much easier task than for others. We asked people to rate their significant other by how difficult it is to buy Valentine’s Day gifts for them, and while the average rating was 4.8 on a 10-point scale (one being the easiest to buy for, 10 being the hardest), 17 percent of people said their person was at least an 8 on the scale.

Men are rated as slightly more difficult to buy for, with an average rating of 4.9 compared to 4.6 for women. This may seem counterintuitive given that men told us they appreciate most traditional Valentine’s Day gifts. 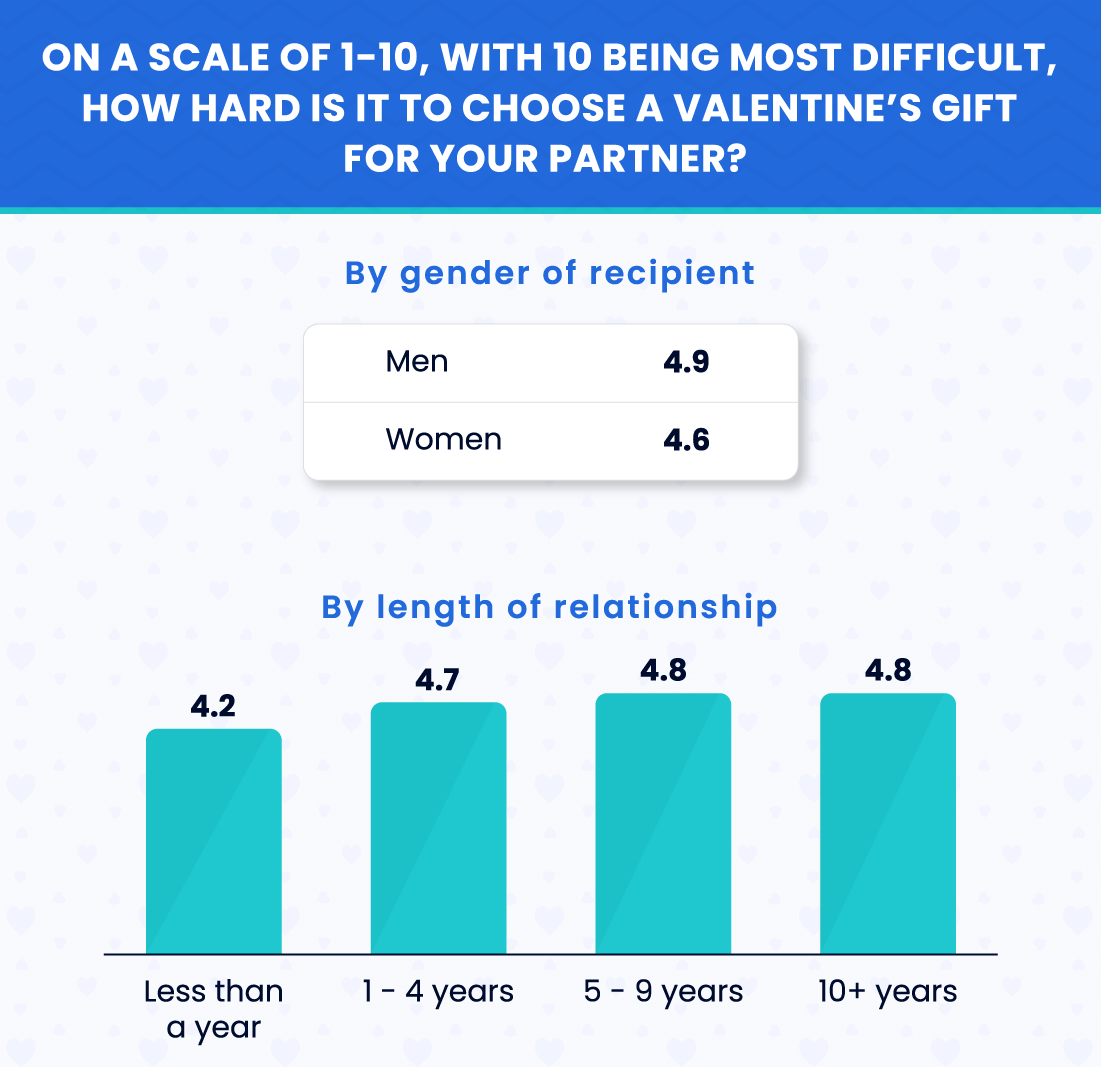 Relationship longevity also has an impact on purchasing difficulty, which isn’t hard to understand. After all, if two people have been together for more than a decade, they’ve likely gotten each other dozens of birthday, anniversary, or holiday gifts.

Deciding how much to spend and getting the right gift for your sweetheart can seem like a lot of pressure, but our research shows that most people in romantic relationships are happy to get just about anything. And it pays to communicate. You never know if your significant other is part of the five percent of people who love those balloons.

We surveyed 1,441 U.S. adults in romantic relationships about their Valentine’s Day plans, including whether they expect to exchange gifts with their significant other, how much they’ll spend, and what types of Valentine’s Day gifts they love (and hate) receiving. Our survey was conducted online Feb. 2-3, 2022.