There’s an old joke about the holiday retail season starting earlier every year as lights threaten to adorn shopping malls as early as Halloween. But like pretty much everything else in 2020, the coronavirus pandemic has turned everything upside down.

In the case of holiday shopping and e-commerce, this will be the biggest and longest holiday shopping season by far. Savings.com’s Retail Index, which tracks metrics such as average order value and purchase intent, shows that the rise in e-commerce purchases that precedes Black Friday started 3-4 weeks earlier than previous years, with higher average order value for purchases. Retail giants are already acting on this early shopping trend. Amazon Prime Day was moved to this week, and Walmart and Target have competing sales.

On the flipside, the in-store, brick & mortar 2020 holiday shopping season is also shaping up to be quite different. Major retailers like Walmart and Target have already announced that they will scale back their hours for in-person Black Friday sales, with both retailers indicating they would not be open on Thanksgiving Day, as have other retailers like Macy's, Best Buy, Kohl’s and JCPenney.

Consumer research data conducted in September 2020 by Savings.com confirms these trends as just 30 percent of consumers intend to shop in-person over Thanksgiving weekend, compared to more than 50 percent who shopped in stores in 2019.

Savings.com’s Retail Index tracks consumer purchase intent for hundreds of online retailers. In recent years, the “post-summer" low happened in mid-September as school routines are in full-swing, vacations are over and families start to ramp up spending for winter and the holidays. This year, the low seems to have occurred nearly a month earlier in mid-August. There are numerous potential reasons for this, including more online shopping for back-to-school and the inability to shop in-store for fall and winter apparel, driving those sales online. In addition, the looming concerns that the USPS can’t hold up under greater shipping demands could be causing certain consumers to make online purchases earlier. 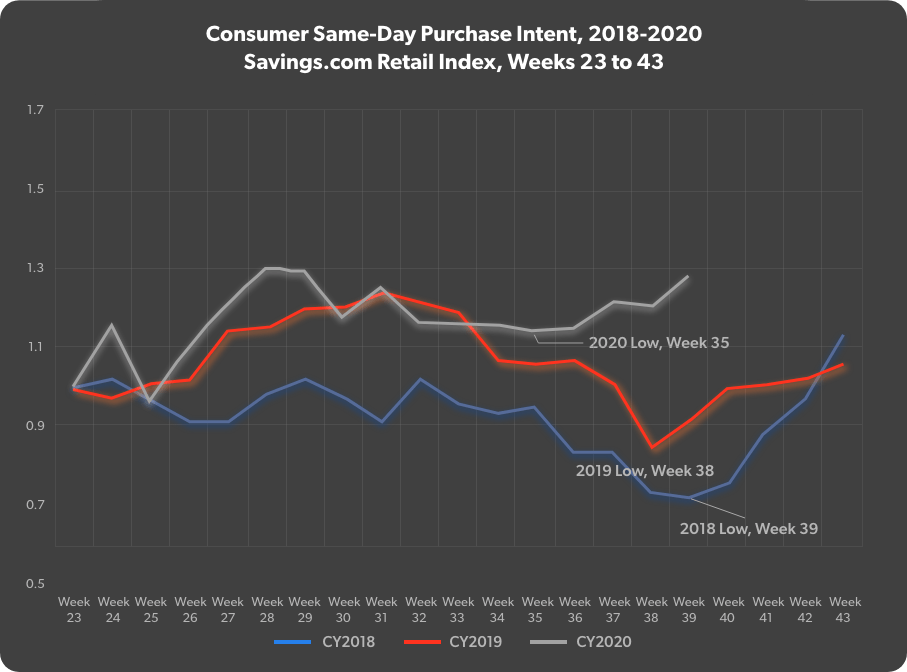 * The Savings.com Retail Index of Purchase Intent measures consumers’ intent to purchase same-day on hundreds of online retailers. The vertical axis is an index value for comparison purposes.*

In addition to more purchases, consumers are checking out with bigger baskets online. The Savings.com Retail Index for Average Order Value tracks a typical basket of goods for retailers in apparel, electronics, housewares and other categories and finds an all-time high in September. The previous all-time high occurred as the economy was shutting down in March and April from COVID-19. 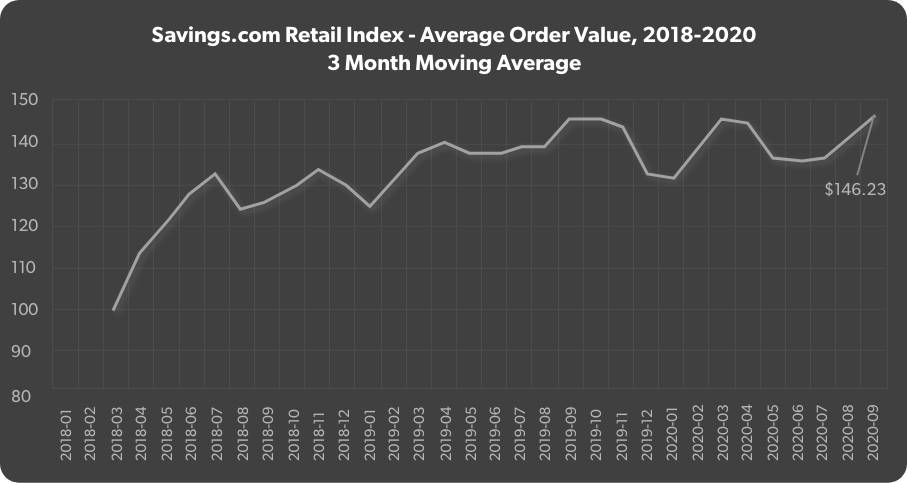 We also asked more than 650 heads of household about their Black Friday and Cyber Monday shopping habits and plans in 2020.

This year, just three in 10 Americans definitely plan to visit a physical store on Black Friday, compared to more than half last year. An additional three in 10 are undecided. Shoppers over 60 are the least likely age group to plan to shop in person. Among 2019 in-person shoppers, just 43 percent intend to shop in-store this year.

In addition to fewer people being highly enthusiastic about shopping in a physical store on Black Friday, respondents indicated that much of their shopping would shift online. About 43 percent of respondents said they did at least half their holiday shopping online in 2019; this year, that should be closer to 60 percent.

This finding is supported by recent national trends in holiday shopping that indicate consumers’ appetite for online shopping is growing. For example, online sales on Black Friday 2019 reached $7.4 billion, making it the second-biggest online shopping day ever, second only to Cyber Monday 2018.

In addition to influencing shoppers to move their purchases online, there is some evidence that the ongoing economic crisis is having an impact on people’s overall spending plans. While the largest group (about 48 percent) said they expected to spend roughly the same amount they spent last year, less than 10 percent said they’ll spend more than they did. Nearly 17 percent said they would spend “a lot less" in 2020 than they did in 2019.

Traditionally, retailers have offered deep discounts or “doorbusters" on Black Friday and Cyber Monday, which is the reason many of us have a mental picture of people running through a big-box store to claim a cheap TV. These deals and sales have a huge impact on shoppers, and only a handful of respondents in our survey said Black Friday/Cyber Monday deals weren’t important to them. 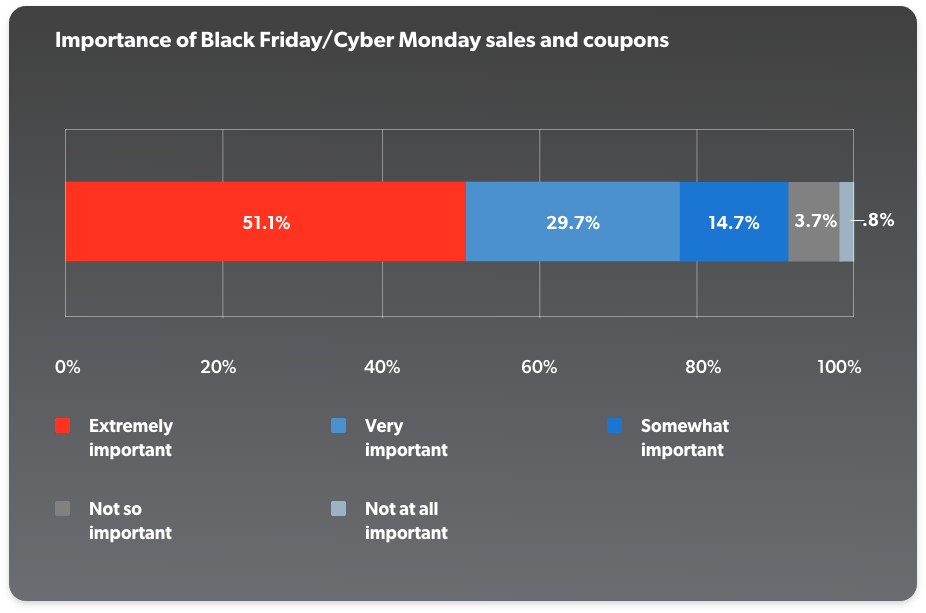 Sales were most important to those who have already made their lists — and checked them twice. Three-quarters of this group said Black Friday/Cyber Monday deals are “extremely important." But shoppers who expect to improvise a bit also place a premium on sales, with more than half of this group saying deals were “extremely important," meaning deep discounts on various items could sway their purchase decisions one way or another.

While about half of shoppers plan to spend roughly the same this year as last year, the prospect of getting a great deal appears to be highly motivating for those who will trim their budgets. Looking through the lens of last year’s spending compared to what they have planned this year, the group for whom Black Friday/Cyber Monday deals are most important were those who plan to spend “a lot less."

It’s also worth noting that while a slight minority of respondents said they planned to shop in person on Black Friday this year, retailers may be able to lure many undecided shoppers. That’s because nearly 60 percent of those who said they haven’t made up their minds, yet, about shopping in physical stores on Black Friday said that deals and coupons were “extremely important," while another 27 percent rated them as “very important."

The COVID-19 pandemic has changed so much of our daily lives, and holiday shopping looks to be no different. But that doesn’t mean shoppers will keep their credit cards in their pockets or that retailers should expect a lean year. While our research does indicate that fewer people have firm plans to shop in person this year and that a sizable percentage will likely spend less in 2020 than in 2019, a large percentage of shoppers haven’t yet decided how they’ll shop this year.

The Savings.com Retail Index tracks a typical basket of goods for retailers in apparel, electronics, housewares and other categories. It also tracks consumer same-day purchase intent for hundreds of online retailers. In addition, we surveyed more than 650 U.S. adults on their holiday shopping habits and plans for Black Friday, Cyber Monday and the rest of the 2020 holiday shopping season. Our survey was conducted online in September 2020.