The Evolution of Mobile Phones

From Brick to Flip: How Far We’ve Come

Self-driving cars, autonomous flying vehicles, human-like artificial intelligence, and robotic surgeons that can peel a grape. The 21st century has undergone numerous technology booms, impacting everything from medical science to energy storage. But the most impactful technology to come from the past century is arguably the mobile phone.

First produced by Motorola in 1973, mobile phones have evolved from a two-pound cinder block to a barely-there computer in our pockets. Between more suitable sizing and futuristic capabilities, what started as a means of mobile communication has become a device tapped, swiped, and clicked 2,617 times daily. Mobile phones are an essential part of everyday life for people worldwide. Still, with upgraded versions developed on a rolling basis, it can be challenging to stop and appreciate how far mobile phones have come.

From size and shape to smart technology and price, let’s break down the evolution of flagship phones across top developers to see just how much mobile phones have changed over time. 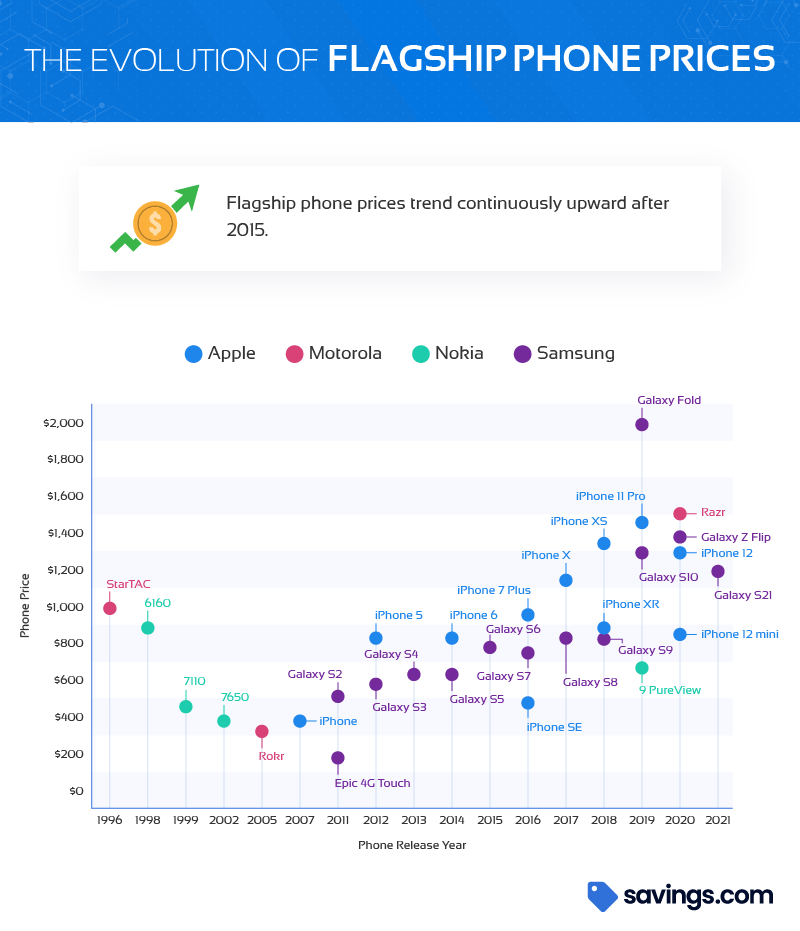 Modern-day cellphones come with a hefty price tag – at least compared to a few earlier versions. But the seemingly high cost of some smartphones may seem relatively cheap, compared to the price tag attached to the first mobile phone. Released in 1983, the Motorola DynaTAC cost a whopping $3,995 each – and that’s without any fancy technology to offer. Considering inflation, that would be the same as Apple charging $10,381 for the next-generation iPhone.

Fortunately, an increase in supply and demand allowed prices to drop significantly. In 1996, the Motorola StarTAC cost just $1,000. While Motorola products took a deep dive from the once $4,000 price tag, it wasn’t until 2011 when Samsung’s Epic Touch 4G reached the lowest cost of all: a mere $200. While a $200 price tag would have fewer people concerned about dropping their precious device, mobile phone prices went on an uphill climb along with the advancements in technology.

In 2014, the iPhone 6 rang in at just under $900, with nearly every iPhone model priced higher after that. Samsung devices took a similar route. Along with the Epic Touch 4G Touch in 2011, Samsung’s Galaxy line acted as the Touch’s more expensive sibling, costing consumers around $600 each. Leaving the 4G Touch behind, each rendition of the Samsung Galaxy increased in price until the Galaxy Z Flip and Galaxy S21 were released in 2020 and 2021, respectively.

Mobile Phones: Past to Present

In 2011, we originally analyzed how the cost of mobile phones decreased between 1982 and 2011. That trend certainly has not continued into the present! However, the array of features offered since 2012 continues to reach new heights. While consumers worldwide complain of sky-high prices, the technological advancements making mobile devices just as powerful as laptop computers make one thing clear: You get what you pay for.

The world of technology is continuously changing, but it’s beginning to turn full circle. From pocket-sized phones with a hefty price tag to sleek, slim, more affordable versions, we have returned to the days of folding phones and astronomical costs. From $4,000 down to $200, it isn’t easy to understand – and accept – how prices have returned to the thousands. But breaking down the features and technology that come with such upgrades explains it all. What once acted as a communication brick has evolved to be a portable computer not much bigger than the palm of a hand.

While the future of tech looks bright, there’s no telling how far away we are from no phones at all. If our life resembles “Black Mirror" plots any more than they already have, we may end up with fully-functioning mobile devices in the form of a contact lens.

Some of the phones attributed to Apple may have features that were first introduced in Samsung models, but this isn’t discussed. Rather, the objective is to show when notable features arrived for Samsung and iPhones separately.

Phone prices between 2011 and 2021 were sourced from Amazon.com.