Annual iPhone Release Outlook: 14% of iPhone Owners Plan to Upgrade to iPhone 14, Up From 10% Last Year

Cost, plus rumored 15% price hike, may dampen excitement for new model, yet nearly 70 percent of those who plan to upgrade have phones that are two years old or newer.

Fifteen years after releasing the first iPhone, Apple is expected to unveil the iPhone 14 in a few weeks. With rumors suggesting a redesigned front-facing camera and a possible chip upgrade, anticipation for the latest model runs higher than it did for the iPhone 13.

Considering that last year’s iPhone 13 helped propel Apple back to the top spot in the global smartphone market, it’s safe to say the company will be relying on iPhone 14 to keep them there.

Each year, we forecast how Apple users will receive the latest iPhone models, how many people plan to upgrade to the new phones, and which rumored features they’re looking forward to most. To understand the market for the iPhone 14, we conducted a study of more than 1,500 iPhone users, and here are our key findings:

Our findings reveal a bit more anticipation for the new iPhone than for the iPhone 13, released in 2021. Last year, 10 percent of users said they planned to upgrade, and that figure is 14 percent this year. 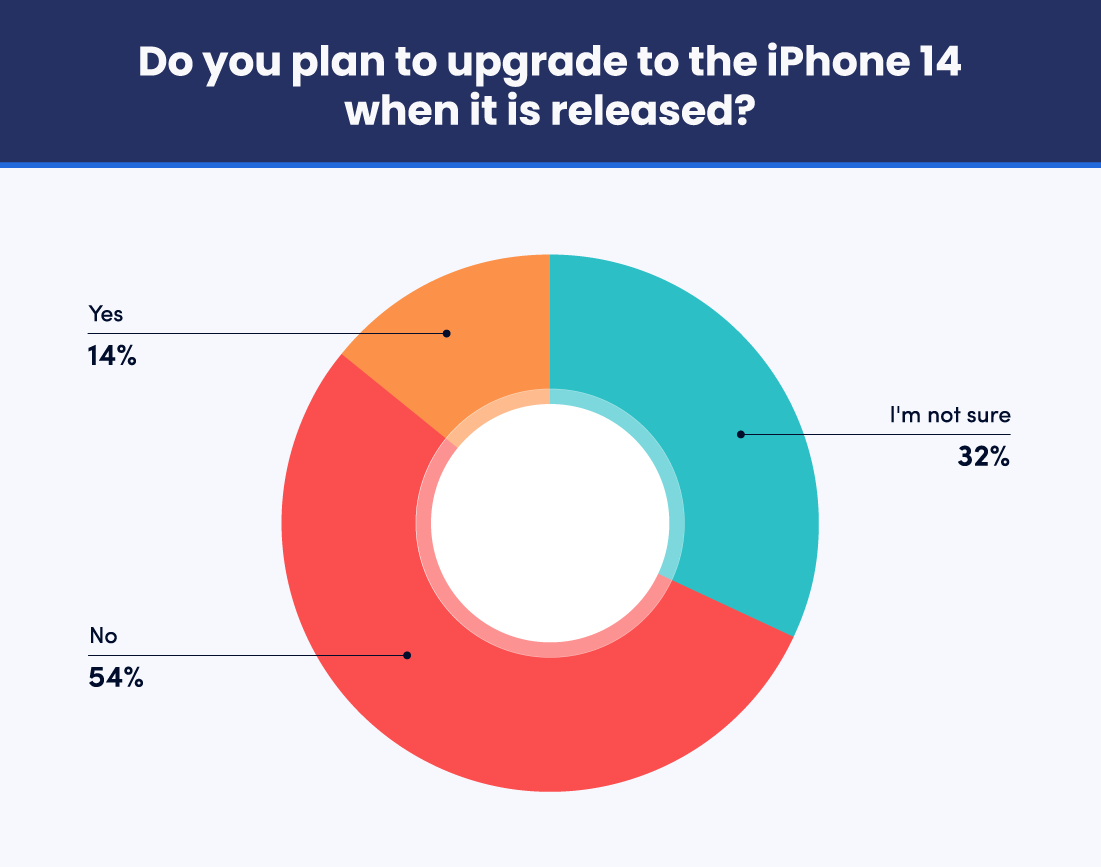 Though it’s a slight increase, it’s especially notable considering that prices are expected to be higher this year and could climb by as much as 15 percent. Despite inflationary pressure still hitting consumers in the wallet, more iPhone users are eager to get their hands on the latest model.

One thing that hasn’t changed as much is that most of those expecting to buy iPhone 14s already have relatively new phones. Only 13 percent of people who told us they were planning to upgrade have had their current device for more than three years, while more than one in three upgraders have owned their phone for a year or less. 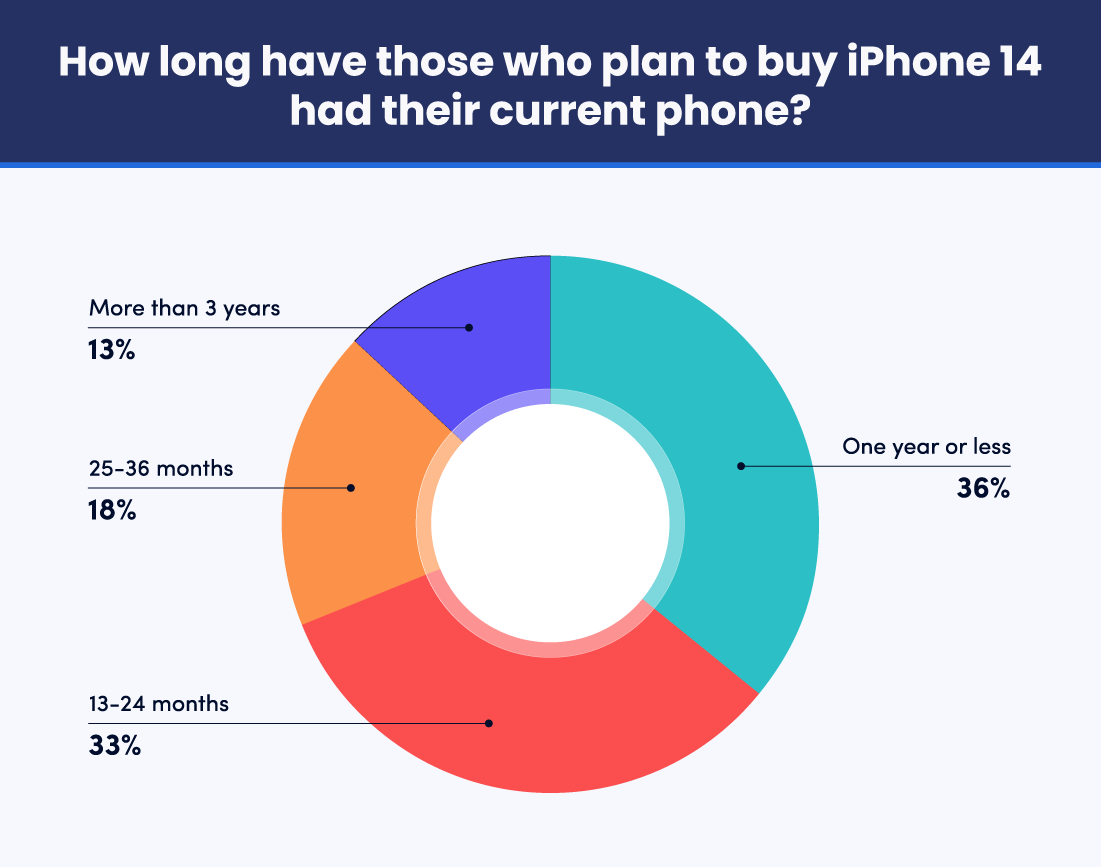 These figures are nearly identical to our findings from a year ago. This suggests that most users might have plans through Apple or their mobile carrier that allow them to upgrade every one or two years.

One big rumor that didn’t pan out in 2021 was that the iPhone 13 would have satellite connectivity, meaning users could make calls and send texts outside of cell tower range.

While that turned out to be bogus, observers have suggested that iPhone 14, while not including full satellite connectivity, may allow for emergency messaging in cell phone dead zones via satellite.

*Among those planning to upgrade to iPhone 14; some features are expected to be available only on pro models; respondents were allowed to choose more than one answer, so percentages will not total 100.

Like with the iPhone 13, users are more excited by the iPhone 14’s potential technology improvements than with its updated exterior. Last year, new body colors were the second-least exciting features. This year, two design changes (a rumored throwback design and smaller notches on the display) were the least exciting for potential buyers.

Nearly one in three people who plan to pass on the iPhone 14 said that none of the phone’s rumored features could persuade them to upgrade. But most people who don’t want to upgrade could change their minds if the latest iPhone comes equipped with specific features.

Technological improvements are more likely than design features to win over holdouts. If Apple releases the iPhone 14 with improved storage and processing speed, more than a third of those not planning to upgrade may change their minds.

*Among iPhone users not planning to buy the iPhone 14; respondents were allowed to choose more than one answer, so percentages will not total 100.

Most people who don’t intend to buy the iPhone 14 say it’s because their current devices are working well for them. Nearly nine in 10 of those not planning to upgrade said their phones work fine.

Cost was also a motivator for hanging onto their current device, with 60 percent of those not planning to upgrade citing an expensive price tag as a primary reason for sticking with their existing phones. The starting price for an iPhone 13 was around $800, and prices are expected to be significantly higher for the new model.

The iPhone 14 will probably not come in a “mini" size, but it will likely come equipped with the contentious lightning port. Many people said they would pass on the iPhone 14 for these reasons.

*Note: Among users who do not plan to upgrade, multiple responses allowed

After the release of the iPhone 13 in 2021, Apple quickly overtook Samsung once again to become the most popular smartphone manufacturer in the world. While it remains to be seen what new features its successor will have, the iPhone remains one of the world’s most in-demand products.

We surveyed 1,504 U.S. iPhone users 18 and older about their plans to upgrade their devices when Apple introduces its next model, expected to be named iPhone 14. We asked about their upgrade plans, their current phones, and which expected features appealed to them most. Our survey was conducted online in August 2022.