American Shopping Habits Are More Polarized Than Ever

The most recent election cycle fueled political divisions that extended well beyond the ballot box. Our latest analysis of retail trends shows that Americans are increasingly aligning their shopping habits to match their political views.

In our previous study on shopping and politics, we revealed that many consumers were making purchasing decisions based upon corporate ideological stances. One year later, some of the issues have changed but the political climate remains equally heated.

This latest study, conducted in January, 2022 and focused on the previous 12 months, shows that Americans are less fixated on COVID-19 guidelines but continue to promote personal politics by patronizing or boycotting brands based on their positions on race, sustainability, and other human rights issues. The importance and intensity of specific issues varied widely by party, mirroring the country’s divide.

Shoppers Are Increasingly Aligning Their Spending with Their Political Views

In a simpler time, shoppers’ options were largely defined by convenience, quality, and price. Today, customers can compare global sellers, examine their corporate policies, and keep track of their social media opinions in seconds. They use this information to turn their purchases into political statements.

Rather than waiting two years for a ballot, shoppers now vote with their wallets each day by directing dollars to agreeable companies and boycotting vendors with opposing views.

We found that 51 percent of consumers prefer patronizing businesses whose policies and stances align with their own political views, compared to 47 percent just last year. 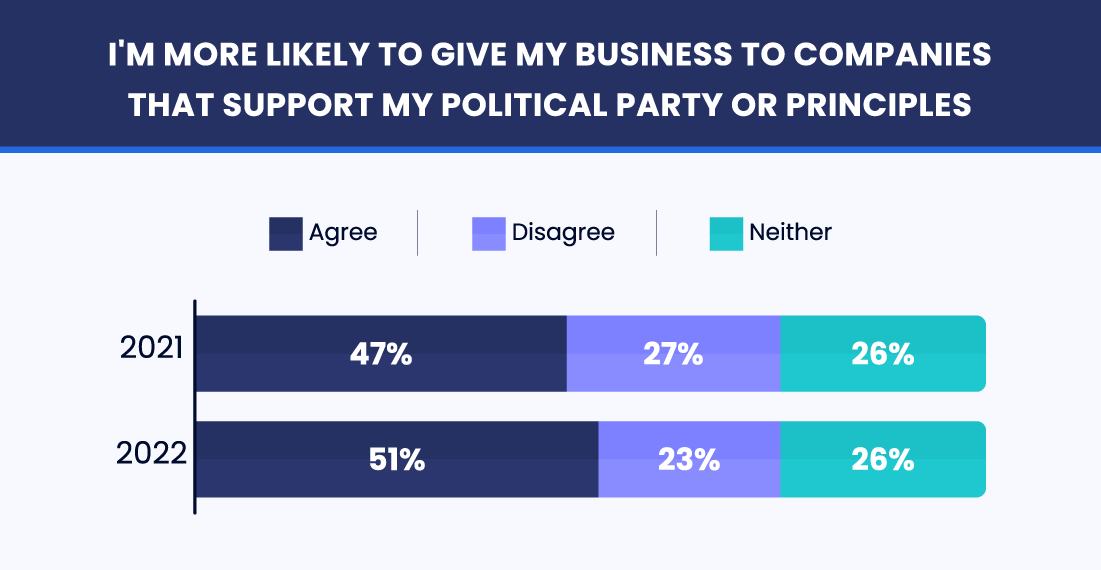 On the other hand, even more consumers were willing to withdraw support from a company whose actions they found offensive: 83 percent of them had stopped shopping with at least one company because of its actions or stances over the past year.

Interestingly, both poor customer service and corporate mistreatment of employees were two of the most influential factors in consumers’ decision making. As workers in service industries and retail have been stretched to their limits since the start of the pandemic, one could argue that poor customer service could stem from worker mistreatment. Despite this possibility, consumers haven’t relaxed their standards: 57 percent said they’d stopped shopping with a company in the past 12 months due to its customer service, but in 2021, 38 percent of people said the same.

Although the pandemic is rounding out its second year, COVID-19 policies seemed to hold less sway over consumers’ decisions now than a year ago. While shoppers were less likely to abandon companies over lenient or strict coronavirus practices in 2021 than 2020, 43 percent of Americans still boycotted a brand in the past year based upon their COVID-19 policies.

Like vaccination rates, consumer stances on corporate coronavirus policies are divided along party lines. Democrats were 3.5 times more likely than Republicans to ditch a brand for being too lenient about COVID-19, while one in three of Republicans deserted businesses that they believed were too strict regarding pandemic requirements.

Democrats were also twice as likely as Republicans to boycott brands for mistreating employees, objected three times as often to environmentally unsustainable practices, and were far more sensitive than Republicans about the mixing of church and commerce.

This conscious consumerism is more than a blip born of 2020’s political maelstrom. It's a practice growing more firmly entrenched among Americans. Forty-nine percent of adults are more likely to base shopping decisions on companies’ social and political stances in 2022 than they were one year ago.

Although there are a few more years before the next presidential election, several other issues currently threaten America’s political unity. Voting integrity, congressional inertia, Supreme Court decisions, pandemic policies, and a host of other social questions have divided the population and helped shape brand loyalties.

Eighty-three percent of shoppers (an equivalent percent that had boycotted a company in the previous 12 months) identified corporate positions that would cause them to boycott a company, with stances on racial equality, LGBTQ+ rights, and coronavirus policies most likely to influence purchasing decisions.

Once again, party affiliation proved the primary differentiating factor. Democrats are more inclined to abandon a company over policy differences and hold stronger convictions regarding each surveyed issue except for law enforcement. The most glaring disparities between the parties regarded racial equality and LGBTQ+ rights.

Overall, these rankings were broadly consistent regardless of age or gender, though women were more prone to boycotting (particularly when motivated by company policies on race, sexual orientation, or contraception).

The dilemma for businesses aiming to accommodate consumer ideals is that the party positions are utterly at odds on most of these issues. Catering to either Democrats or Republicans could earn backlash from the opposite side.

However, Americans of all stripes agree corporations should appreciate the problems facing society. Eighty-one percent of consumers prefer shopping with companies that demonstrate empathy, though even that sentiment varies somewhat by political alliances.

Consumer empathy was most consistently directed to the plight of modern workers. Shoppers from both parties scrutinize employee treatment by brands more closely now than they did one year ago.

Such public support may have helped empower employee demands and spark the “Great Resignation" that has tightened the labor market and elevated wages by 4.5% in 2021.

How else might corporate America respond to this burgeoning consumer movement?

Do Americans Think Companies Should Take Sides on Political and Social Issues?

With retail shelves spanning both sides of the aisle, acknowledging politics can become a pitfall for corporations seeking a broad appeal.

Some businesses embrace ideological niches by openly backing the Left or the Right, while others turn boycotts into “buycotts" by rallying one base against the other (both Nike and Goya Foods saw sales spike after being excoriated by one party). Many enterprises walk a tightrope of limited or performative commitment; issuing CEO letters, pledging funds that don’t materialize, or temporarily suspending donations.

Avoiding all controversy might be the safest path, but many consumers now reject silence as a sign of neutrality. In 2021, 34 percent of consumers said they’re less likely to shop with companies that take political stances. Today, only 22 percent felt that way. This signifies a growing comfort with brands taking sides on political issues. 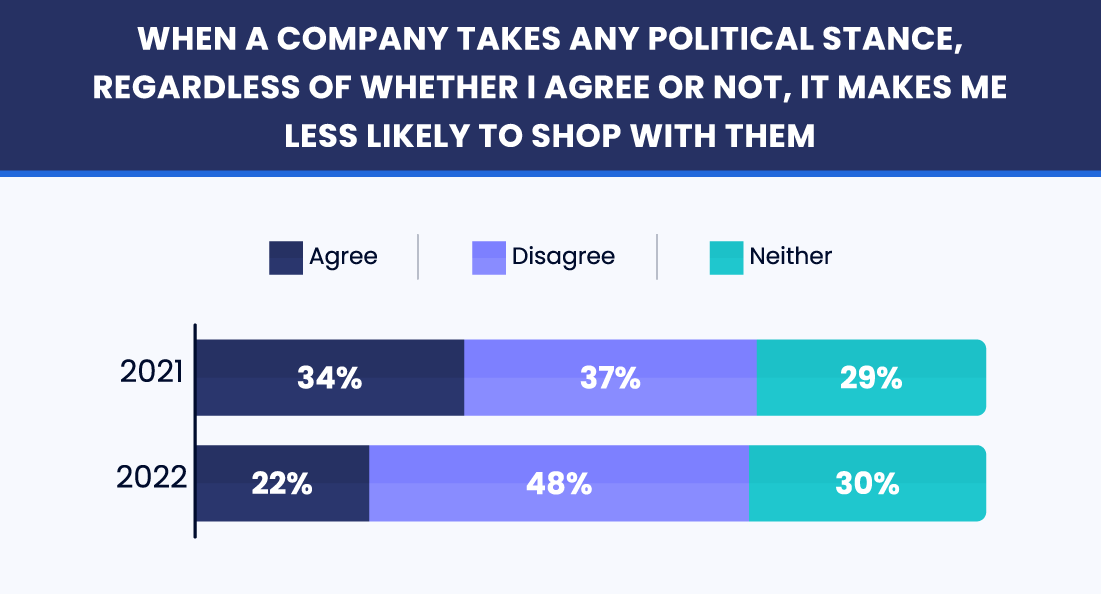 In fact, twenty percent of Americans in our study said that companies should actively participate in politics and state their opinions. One in three Democrats felt this way, but nearly two-thirds of Republicans believed businesses should simply mind their own business. This conservative position may soon fade away, as it is held most firmly by older Americans. 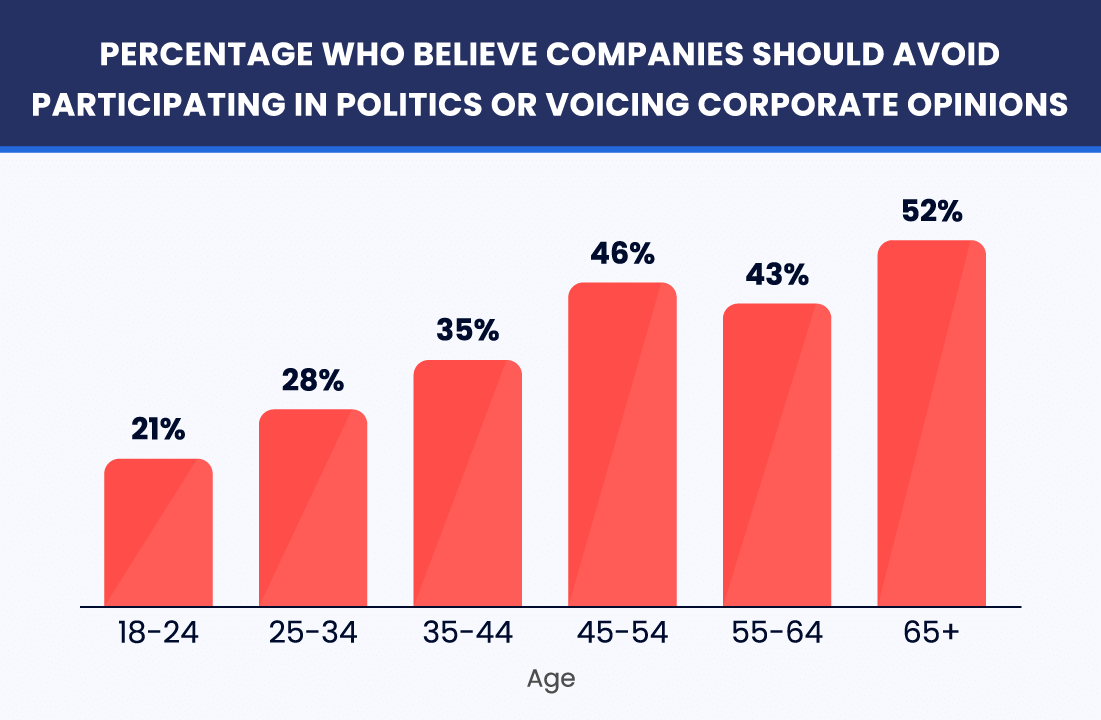 Nearly as many Americans will boycott a company with which they disagree (44 percent) as will choose one for sharing their views (51 percent), and every prominent issue presents alternate positions with the potential to alienate one side or the other.

Conscientious spending could create a mechanism for change if businesses are willing to take political stances with integrity. Otherwise, companies may become more performative with their politics, telling shoppers what they want to hear without making any substantive progress.

In January 2022, we conducted an online survey of 1,010 American adults about their opinions and experiences related to politics, current events, brand behavior, and public corporate positions. The survey was conducted online in January 2022 with a set of respondents representative of the U.S. population based on age, gender, and race. The results were compared to an online survey executed by Savings.com in April of 2021.