COVID-19, Political Stances Impacted Purchases As Much as Customer Service in 2020-2021

COVID-19, Political Stances Impacted Purchases As Much as Customer Service in 2020-2021

Major League Baseball’s decision to relocate its All-Star Game from Atlanta to Denver over Georgia’s new voting law is the most recent example of businesses aligning for or against a law, candidate or political position. Republican legislators on the state and federal level have suggested they might pass laws to punish the league for the move, and conservative lawmakers and pundits have proposed boycotts of Coca-Cola and Delta, both of which have come out in opposition to Georgia’s voting law.

We asked more than 1,000 U.S. adults about how companies’ political and cultural statements impact their purchasing decisions, including policies on COVID-19. We also asked them about how other experiences with companies impact purchase decisions. We did not ask consumers about Georgia’s law, specifically.

The 2020 presidential election was incredibly divisive, and spilled over into (seemingly) every part of American life. One in 4 respondents, which would equate to more than 50 million adults, said that who a company supported in the 2020 election was a reason to permanently stop supporting that company. 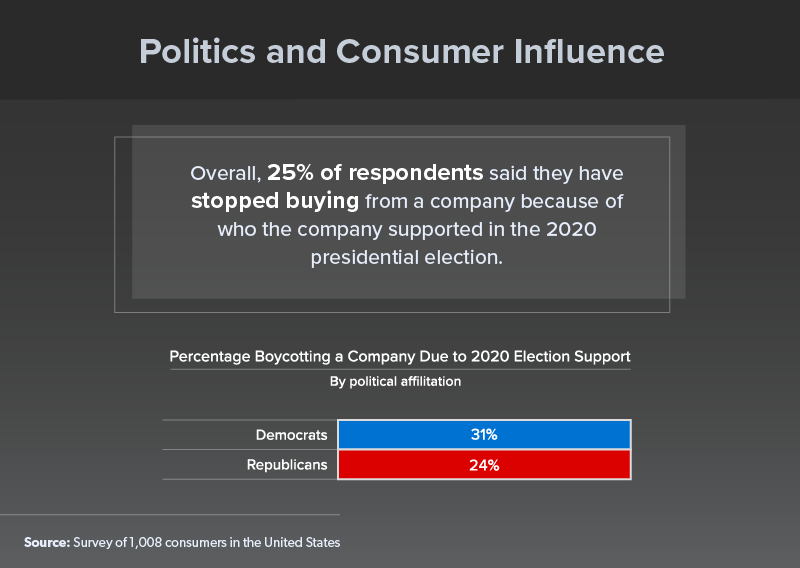 COVID-19 policies impacted purchase decisions as much as customer service in 2020 and 2021.

Outside of the presidential race, we asked consumers what were reasons they stopped shopping with a brand during the last 12 months. We’d expect customer service to be the tops of the list, and it was essentially equal to lenient COVID-19 policies and mistreatment of workers. Strict COVID-19 policies, controversial statements by businesses and refusal to comment on controversial issues all impacted purchase behaviors for 10% to 25% of American shoppers.

This tracks with other research in this area, including a Pew Research Center study that found that while Democrats and Republicans agree that the pandemic is an economic threat, only 41 percent of Republicans say it’s a major health threat to the entire country.

Just over 60 percent of Democrats said they were more likely today than a year ago to be influenced by brands’ political stances, while only 40 percent of Republicans said the same. While that figure represents a minority view among Republicans, it’s still the most common answer.

When it comes to their specific purchase behavior, the political split continued. Overall, just under half of people say they’d prefer spending their money with companies whose views align with their own. Democrats are more enthusiastic about brands that share their political views, while Republicans are more likely to avoid brands that take a political position at all. Men are more likely than women (38 percent vs. 31 percent) to say they’d be likely to punish a brand for making a political statement regardless of how they felt personally.

The Bottom Line: Companies More Likely to be Rewarded for Taking a Stand, Even Amid Boycott Threats

Businesses taking political positions is nothing new. Even baseball itself has seen its game caught up in sensitive political and cultural moments. When the Brooklyn Dodgers called Jackie Robinson up to the major leagues in 1947, the move was met with outrage among many baseball fans and even players. Robinson today is the subject of his own league-wide celebration to commemorate his first game in the majors (April 15, 1947). But at the time he ended 80 years of segregation in baseball, less than half of white Americans believed Black people should have the same employment opportunities as whites, and less than one-third believed schools should be integrated.

A Morning Consult survey at the height of Black Lives Matter protests in 2020 indicated that MLB fans were slightly more likely to identify as Democrats than Republicans (38 percent vs. 32 percent). That could mean the league feels taking a stand against Georgia’s voting law was more likely to engender support from its fans than derision from those who disagree. Research suggests that’s likely the case: The majority of avid baseball fans (62 percent) agreed with the league’s decision to move the All-Star Game from suburban Atlanta to Denver, according to an April 2021 Morning Consult survey.

Our data shows that while deep divides exist along partisan lines, the average person is more likely to spend money with brands that share their views than they are to punish ones that don’t. And there’s reason to believe this phenomenon will deepen and expand, as few people say they became less concerned about the intersection of business and politics in 2020.

Data used in these analyses were collected from a survey of U.S. 1,008 consumers. Fifty-one percent of respondents were female, 48.7 percent were male, and less than 1 percent were nonbinary or reported an unlisted gender identity. The average age of respondents was 40 with a standard deviation of 12.7 years. The average annual income of respondents was $58,000 with a median of $50,000. All respondents included in the analysis passed an attention-check question. The main limitation of this survey is the reliance on self-report, which is faced with several issues including, but not limited to, exaggeration, telescoping, and recency bias.