The age of 18 may legally constitute the line of demarcation between childhood and adulthood, but an unpredictable job market, along with an ever-increasing cost of living, often has young adults (and some who aren’t so young) struggling to keep their heads above water.

Pew Research Center has for years tracked the percentage of young adults who still live at home (more than half of 18- to 29-year-olds in 2020 and likely higher now due to Covid-19), but less well-understood is how many parents of adult children provide financial support, regardless of whether their kids still live with them.

To understand this phenomenon and the impact it has on the financial health of the parents, we surveyed about 1,000 U.S. adults who have at least one child 18 or older.

Here are some of our key findings:

About 1 in 2 Parents Financially Support an Adult Child

While not every parent currently provides financial support to their children, we found that around 95 percent of parents would do so if their children needed help. Around one in three said they’d be willing to live a more frugal lifestyle, 25 percent would pull money from savings or retirement, and 22 percent would actually delay their retirement. Only five percent of parents said they’d be unwilling to do anything to help support their adult children financially if the need arose. 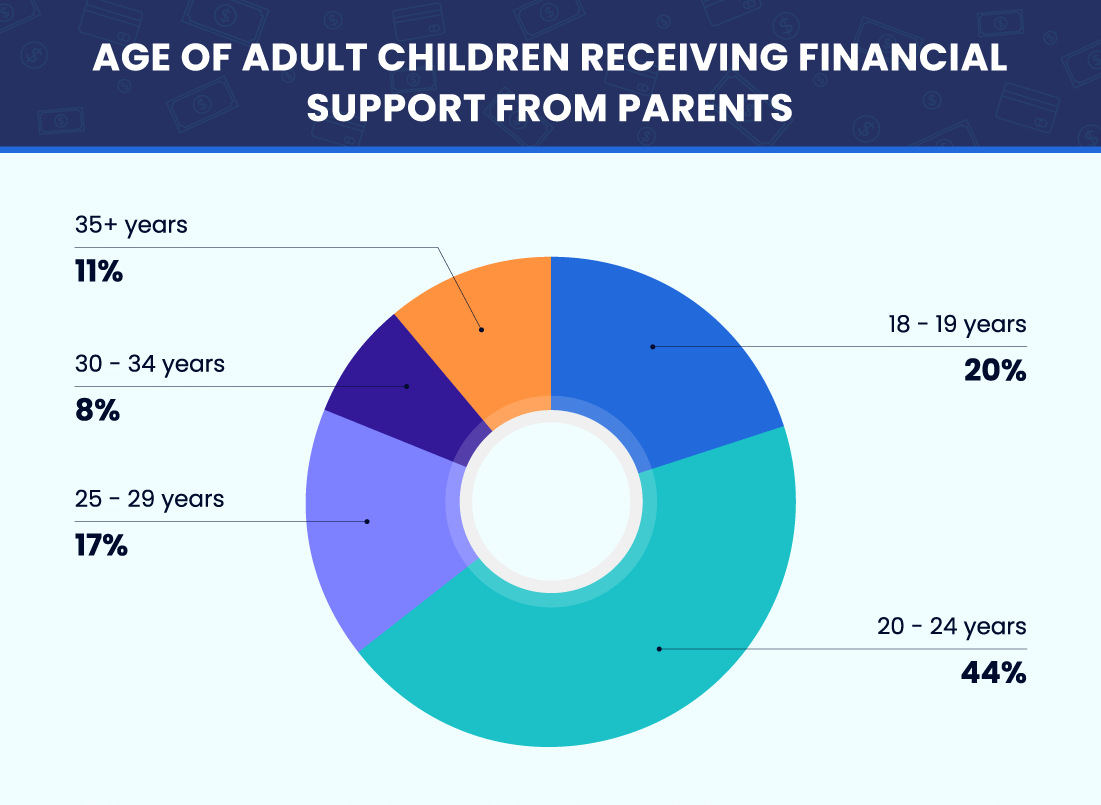 Almost one in five adult children who receive financial support from their parents are over the age of 30. Notably, almost one in three parents who are already retired are financially supporting an adult child. 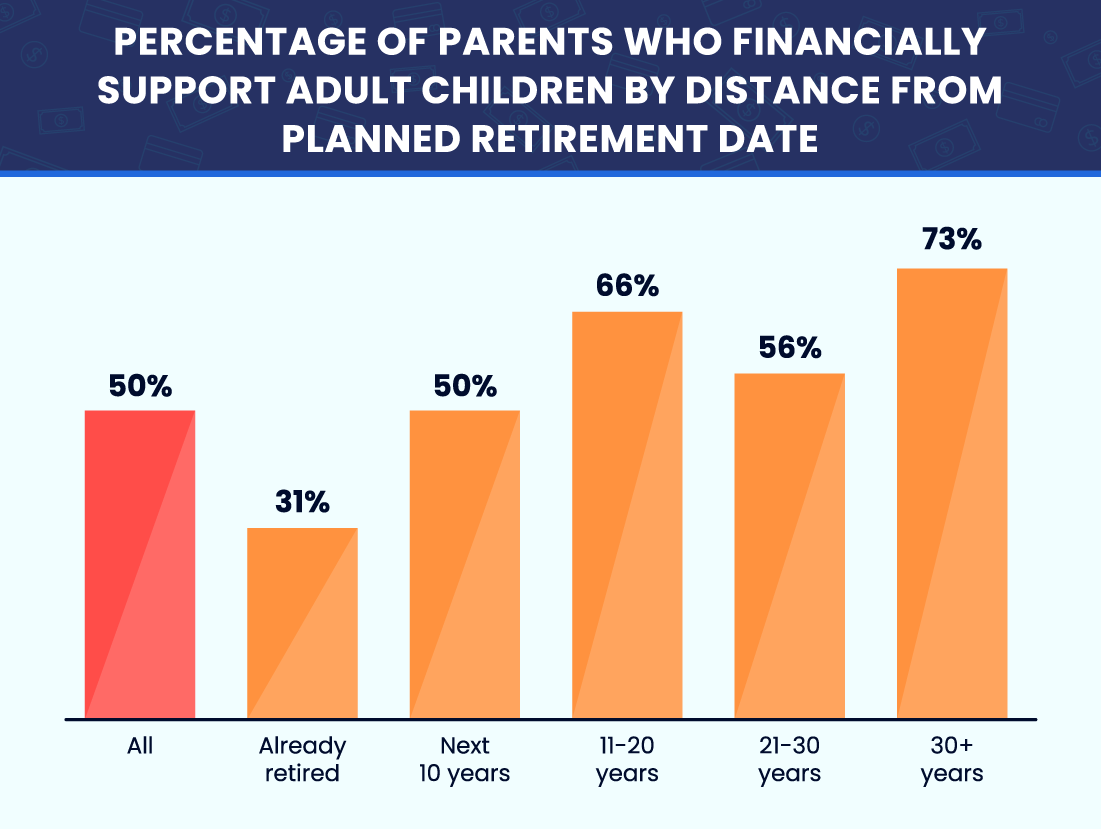 In addition to their own age and the age of their offspring, parental income also has an influence on whether they contribute financially to their children. About a third of parents with annual income below $30,000 provide financial support to their adult children, compared to about 63 percent for those earning more than $100,000 annually.

On average, parents who support their adult children financially spend just over $1,000 per month, and costs like food, health insurance, rent, and cell phone bills are the most common. Parents of Gen Z adult children are also often shelling out for tuition and other school fees, which were most expensive among the categories in our research at $631 per month on average. Rent or mortgage payments were the second most expensive contribution, at $467 a month on average.

*Among parents who provide financial support

Overall, 61 percent of adult children who receive financial support from their parents live at home, which would certainly influence parents’ spending in categories like food, discretionary spending, and travel. It also gives children the opportunity to help their parents pay for living expenses.

However, 62 percent of adult children living at home don’t contribute at all to the household expenses. Those who do contribute, though, offer $338 per month on average. Millennials are much more likely than Gen Z’ers to help offset their living expenses. Only 48 percent of millennials who live at home do not contribute to monthly expenses versus about 70 percent of those in Gen Z.

Most parents in our study had an exit plan for the financial support they provide their adult children. Almost half of parents who are helping their kids say they plan to withdraw their support in a year or two. Notably, though, almost one in five (18 percent) have no plans to stop providing financial assistance for their children.

Majority of Parents Feel Stressed About Living Comfortably in Retirement

Among all parents, 51 percent said they don’t feel responsible for providing a financial boost to their adult children, but those with higher income were more likely to say they feel it’s their duty. Among parents with personal income less than $30,000, only about 26 percent said they feel responsible for financially supporting adult children; this figure was about 49 percent for those who make $100,000 or more.

This sense of responsibility may be adding stress as parents also prepare for retirement. Forty-three percent of parents said they have sacrificed their own financial security for the sake of their children, and this sacrifice does appear to be reflected in how they feel about their own financial futures. 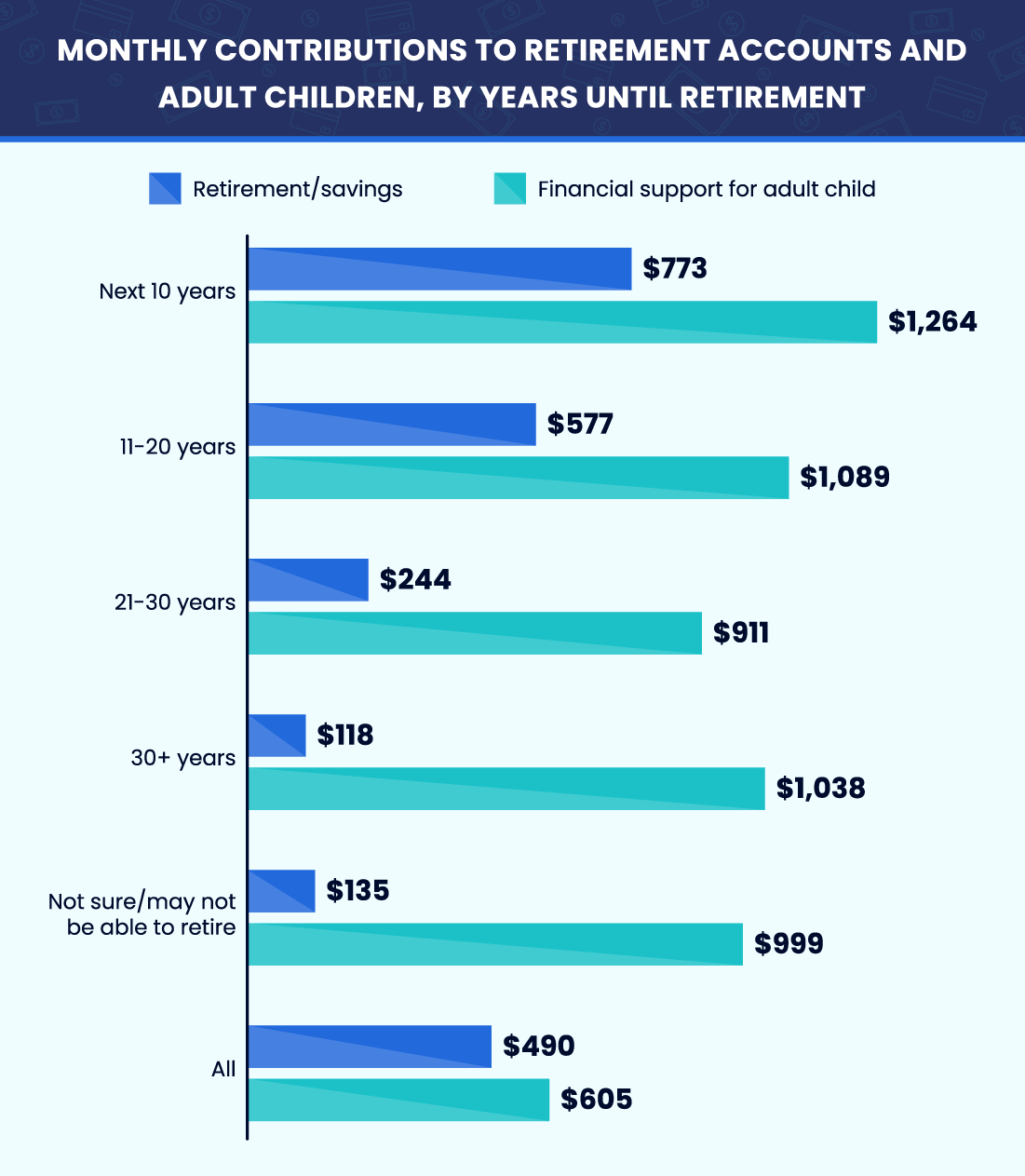 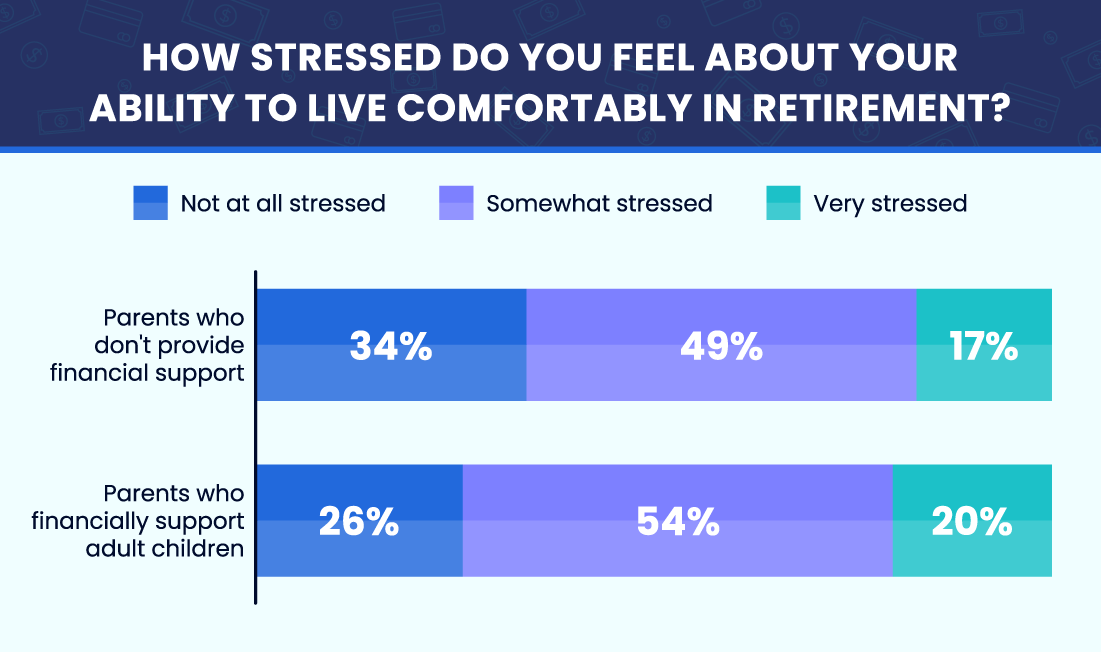 Parents expect to provide for their kids in many ways, including financially, throughout their childhood, but for most of modern American history, it’s been assumed that regular parental financial support stopped with adulthood, or at least once high school or college were over. But as our research shows, this is often not the case, and it may be to the detriment of parents as they age and get closer to retirement.

We surveyed 977 U.S. parents with at least one adult child regarding whether they provide their adult child (or children) with financial support, as well as their feelings about retirement. Our survey was conducted online in February 2022. 50 percent of participants were women, and 50 percent were men. 28 percent were retired. The breakdown of participants’ ages are as follows:

The breakdown of participants’ personal annual incomes are as follows: