The Best Time To Buy Anything: A Timeline of Hotspots for Deals and Discounts Year-round

A Look at Retail Pricing Trends

When planning purchases big or small, it pays to time your transactions carefully. Manufacturers and retailers adjust prices on a regular, recurring basis to maximize sales and move products in periods of low demand. In a previous piece, we scoured years of promotional sales data to determine the best times to buy specific products. Our past research revealed which months, and even days of the week, offered the most discounts and deals for certain items. This report helped consumers to quickly determine the optimal time to make a purchase.

Recently, we wondered if anything had changed since we first studied these industries that routinely offer discount pricing. For example, is it still best to buy airline tickets on a Tuesday or big appliances in the fall? We studied a new collection of data from 2011 to 2021 to better understand the current discount pricing trends of everything from cellphones to swimwear. Here’s a look at what we found.

A Year of Savings

As we reviewed the numbers, we discovered some product categories offer the majority of their best deals in a single month. For instance, car tires are best purchased in March, and furniture is most affordable in May. Other product categories, such as cellphones, hit their lowest price points multiple times a year. 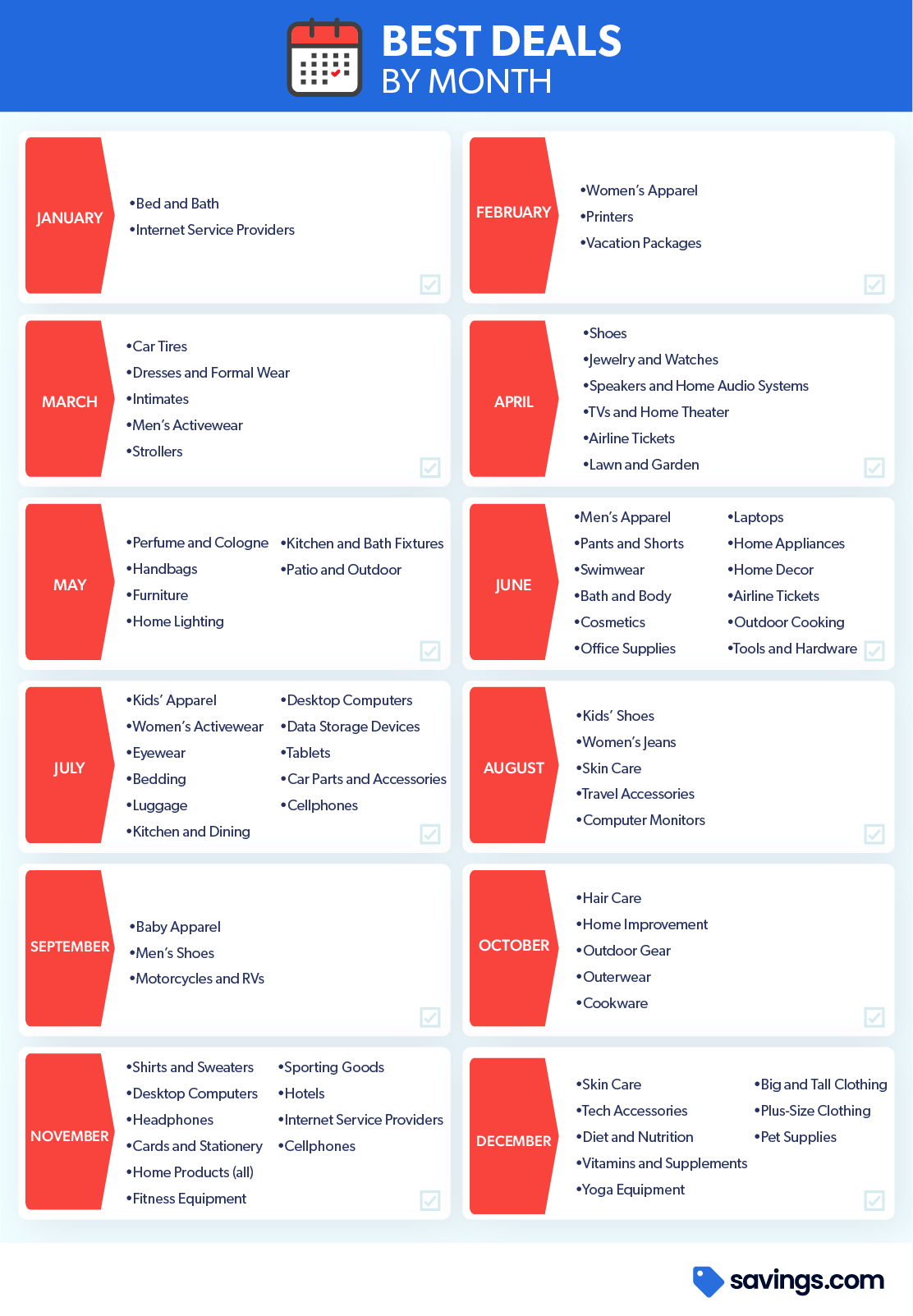 Almost all categories showed a significant boost in total deals offered during the month of November, most likely due to the glut of deals around Black Friday and Cyber Monday. This modern phenomenon is especially pronounced for the following:

Besides the typical November boom, the summer months are often the best time to snag a deal. According to U.S. News & World Report, August is the best month to buy furniture, swimwear, and diamond engagement rings. It’s also when clothing, footwear, and school supply retailers are hard at work promoting back-to-school sales. Shopping by monthly trends helps consumers to budget better for big expenses and save more money, too.

After discovering which industry offered the best deals each month, we also wanted to see which day of the week would be best for buying products within those months. 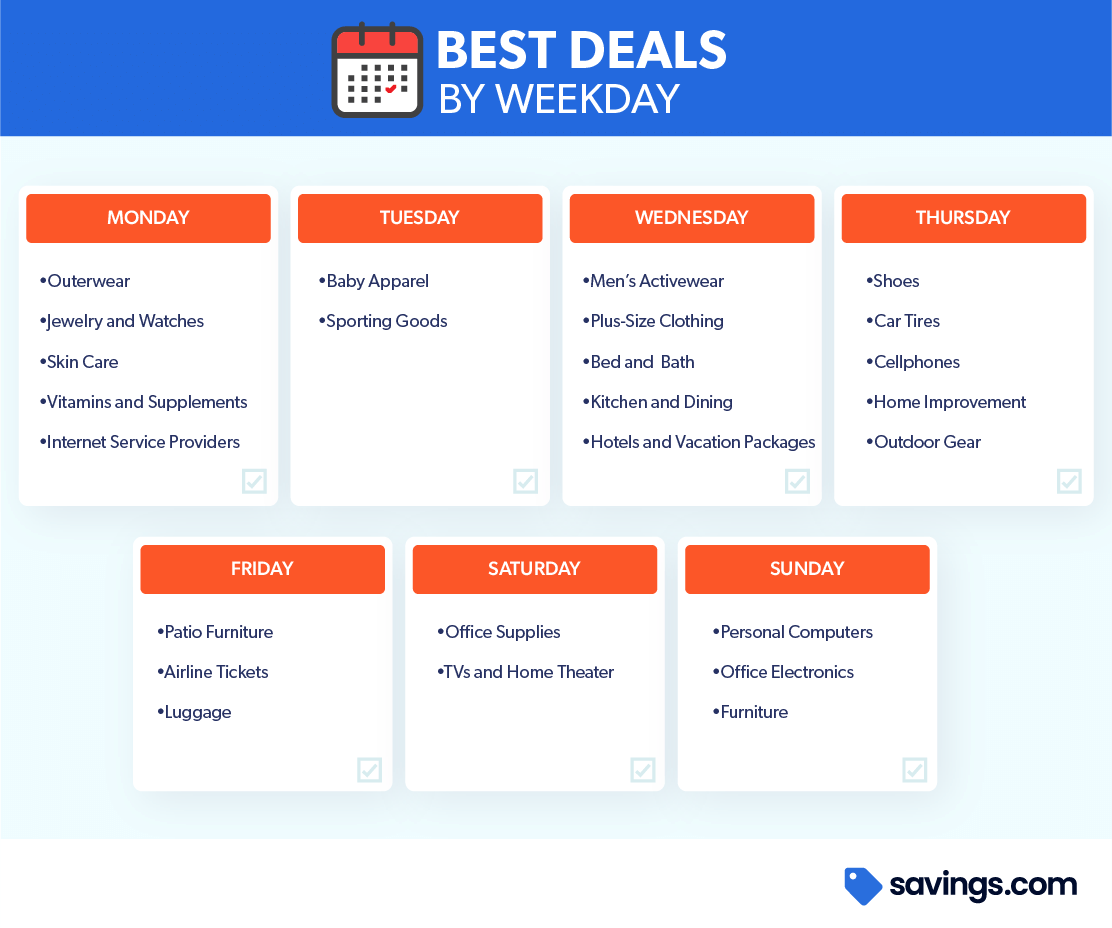 We found some changes when we compared current data to our past research. Our study revealed that the best day to purchase airline tickets is now Friday instead of Tuesday. The best time to book a hotel room is also different. It’s now recommended to reserve rooms on Friday instead of Sunday. A recent study of travel trends by the Airlines Reporting Corporation (ARC) concurs that hotels have lucrative deals on Fridays. The study also found that Thursday and Friday departure flights offer the cheapest fares. Booking airline tickets at least three weeks in advance and having flexible fly dates also helps travelers to save money.

For an even clearer picture, we’ve compiled all current monthly and daily pricing trends for the top industries in one place below:

Buying a big ticket item at the lowest point of its price cycle saves a consumer a lot of money, but knowing when to pull the trigger isn’t always easy. Sometimes it’s as simple as following seasonal trends throughout the year or purchasing clearance items the day after a major holiday. Other times, product pricing trends are more difficult for the average shopper to track. Our study of the most plentiful deals by month and day makes it easier for all to understand and take advantage of current cost-saving trends.

Data used in this analysis are from deals offered on Savings.com by diamond-level affiliates. All deals considered ended after January 26, 2011, and began before January 26, 2021. “Most common" deals for each month and day of the week were determined by identifying the month of the year or day of the week on which the most total deals in that product category had begun to be offered.

Data used in this analysis best represents patterns in offerings made by Savings.com affiliates on our service, and analysis does not consider type or magnitude of deal.